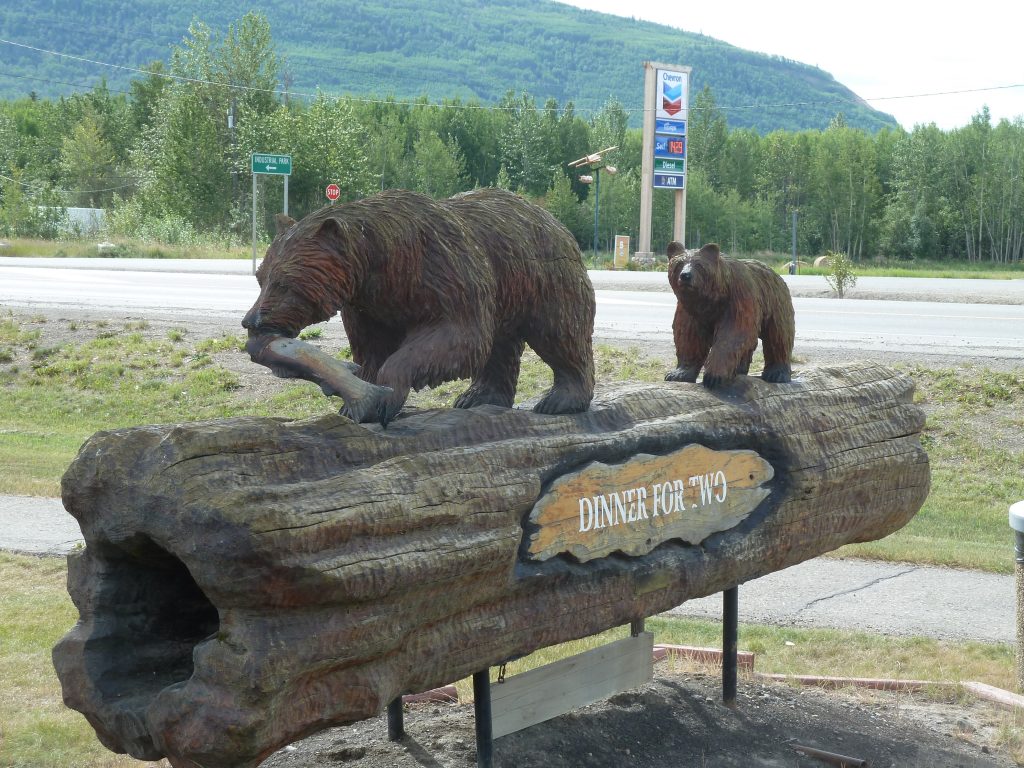 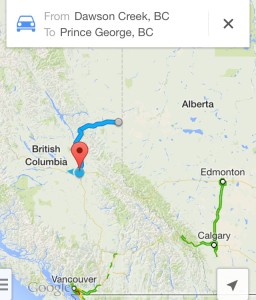 There are not too many petrol stations along this road.  All through where we have been travelling the gas stations are just big gravel areas sometimes with a cafe attached. 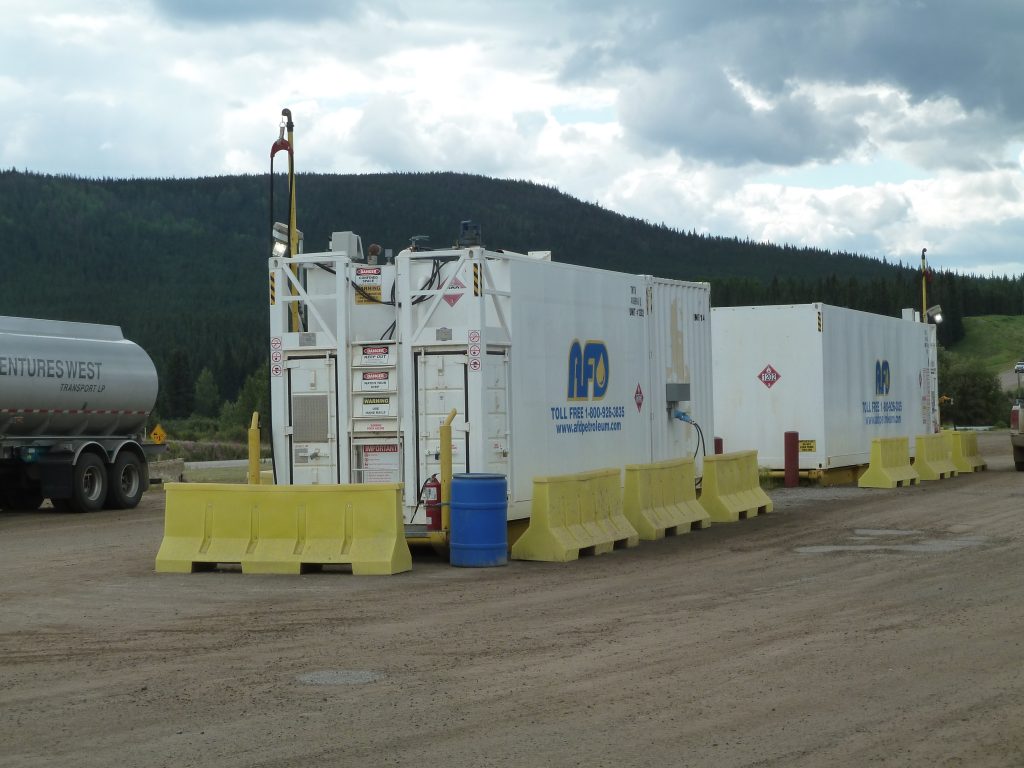 This has the prize of the most complicated gas pump, Charlie had to even do a safety checklist before being issued a security number to then go and pump the gas.  Took longer to go through the procedure than to actually get the petrol. 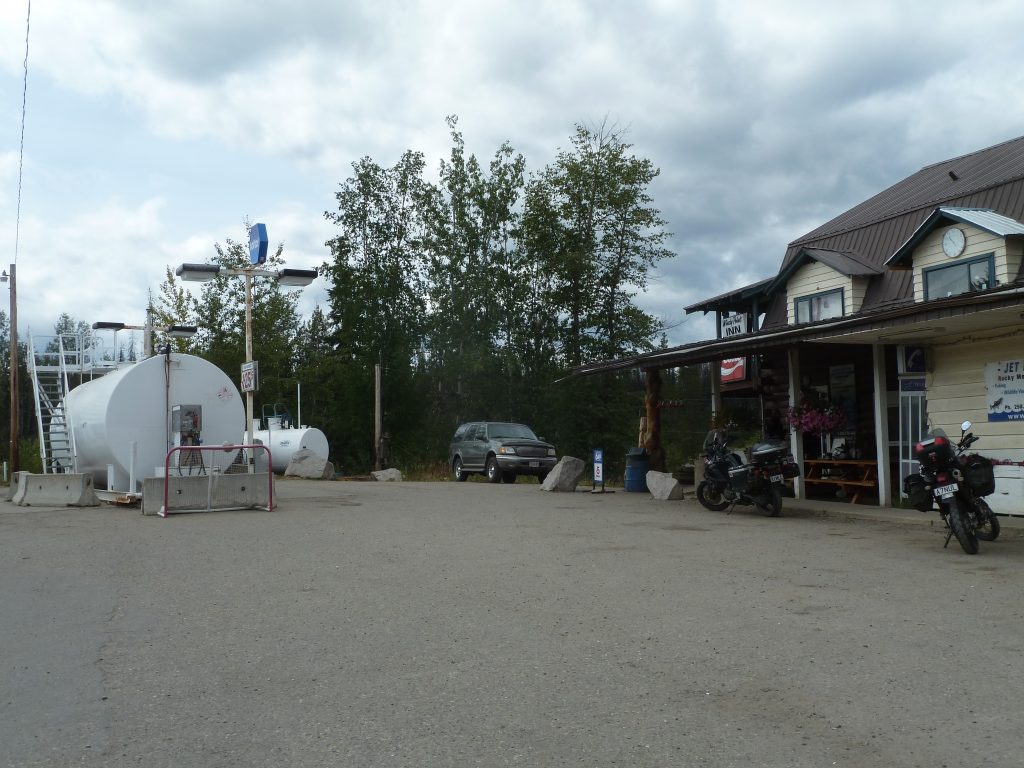 This is more common, except that its fuel tank is above ground.  The guy who owned this business was quite concerned about a fire that just last week was within a mile of this property.

Along each side of the street in Chetwynd were chainsaw carvings.

As we left Dawson Creek we also left behind the farmland and back into mountains, trees, rivers and winding roads – always a pleasure on a bike. 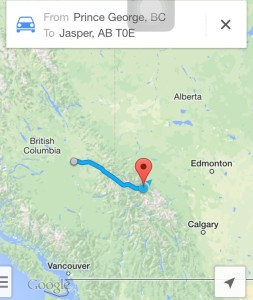 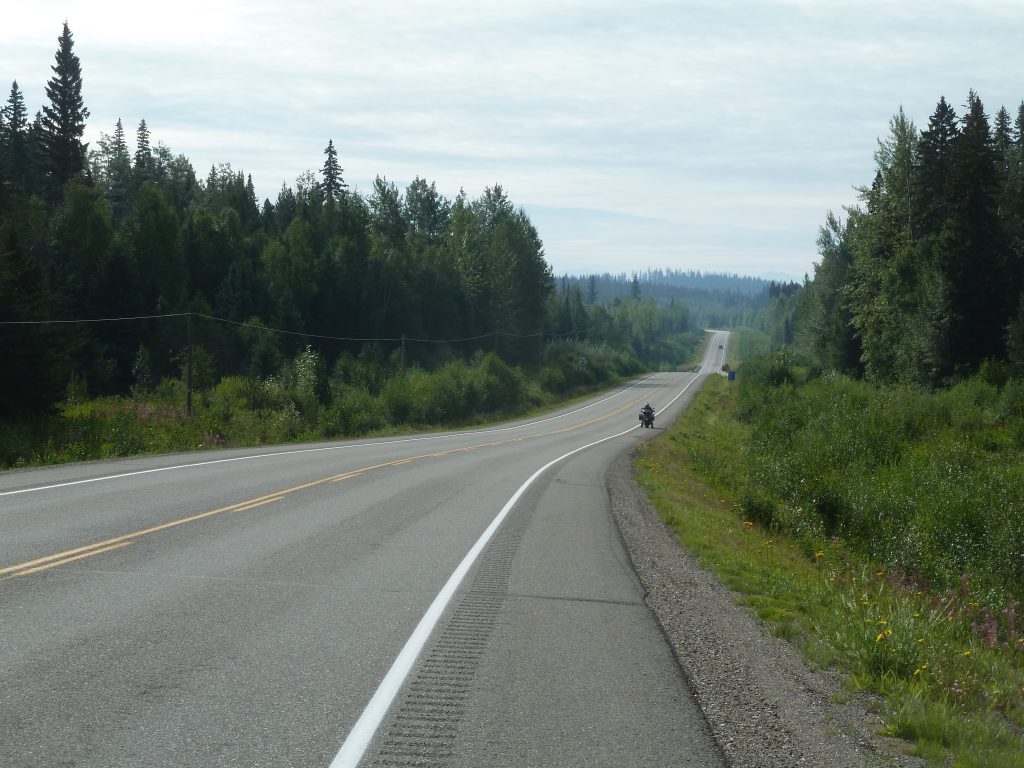 Another day in the office. 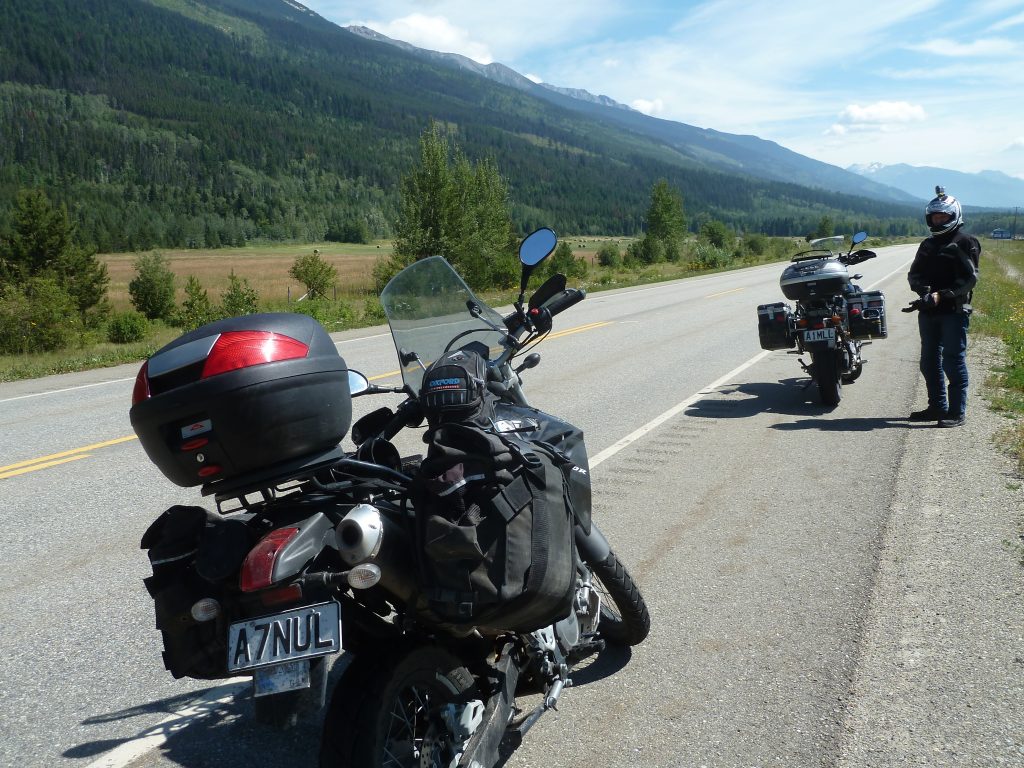 Okay, so we have been in unseasonally cold temps up north, and now we are in unseasonably hot temps as we come in to the national park up near Jasper.  Here we are taking off layers. 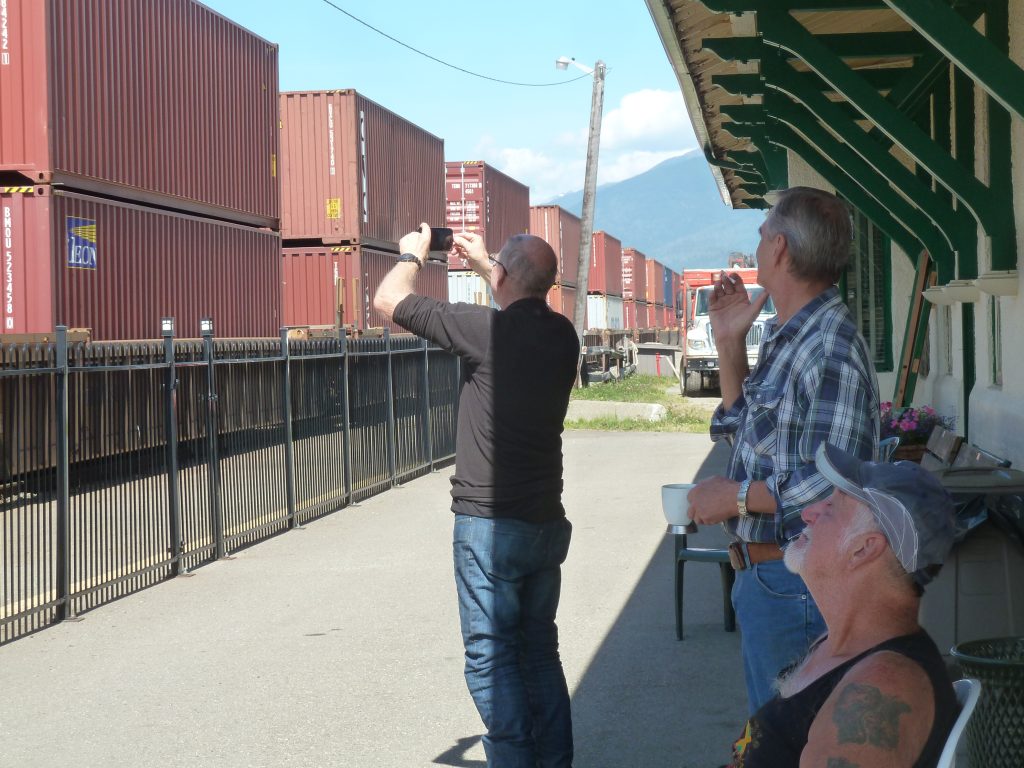 There’s a great little cafe in the old train station as the end of Main Street in McBride.  There we met Gerald and Lyall, two locals. Gerald had a wealth of local knowledge, and Lyall liked to travel to out-of-the-way places, his current favourite being Jamaica.

Charlie caught up with the engine driver of this train when in Jasper, and  had a chat.  He said that this train was 2 miles long – that’s why the three engines.  This train picks up goods at the port of Prince Rupert and goes to the other side of Canada to Halifax.  We have friends who sat with us at a dinner table in Jasper when we were last here two years ago, and counted the number of carriages 🙂  It took them a while!!  (Just thought I would mention it – haha) 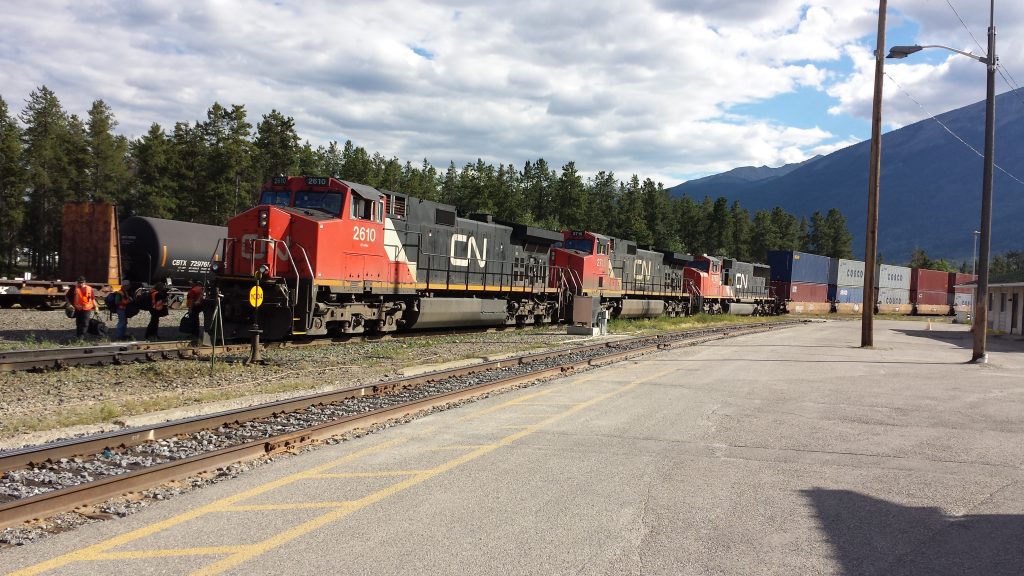 Today we were travelling behind half a house – that’s long and wide.  The driver was very good at keeping the edge of the house lined up with the centre line and his right hand tyres on the white line on the side of the road, and the rest of the house extended past that.  When it came to passing him it was very blustery.  Did I mention that he was travelling at 115km/hr! 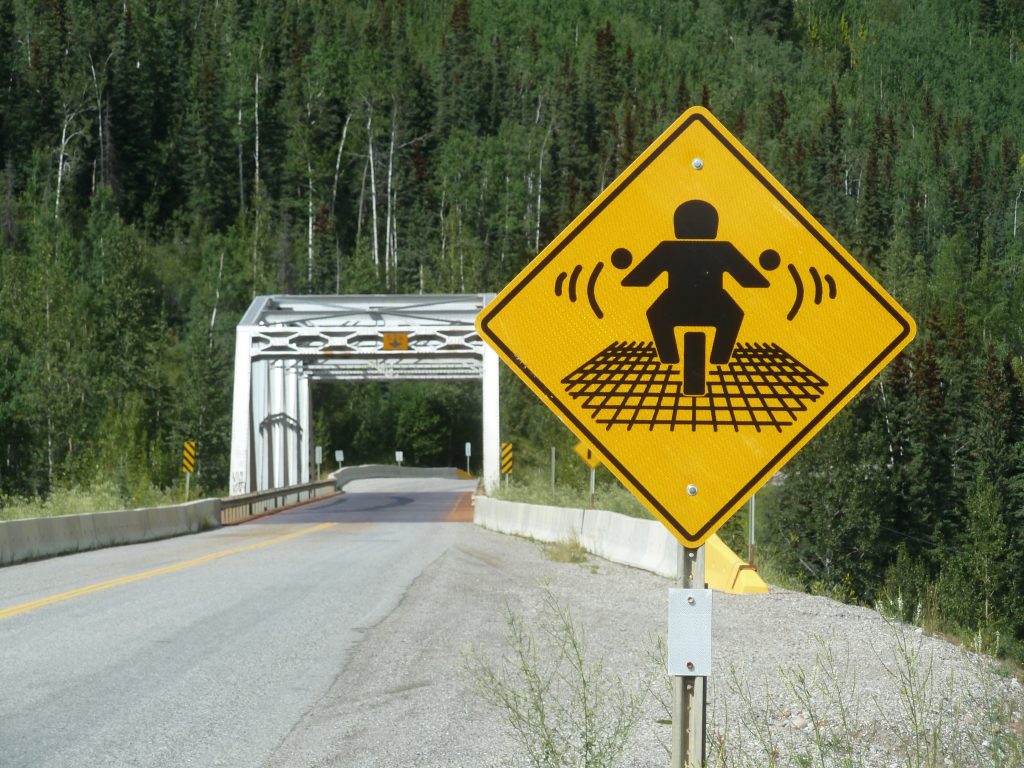 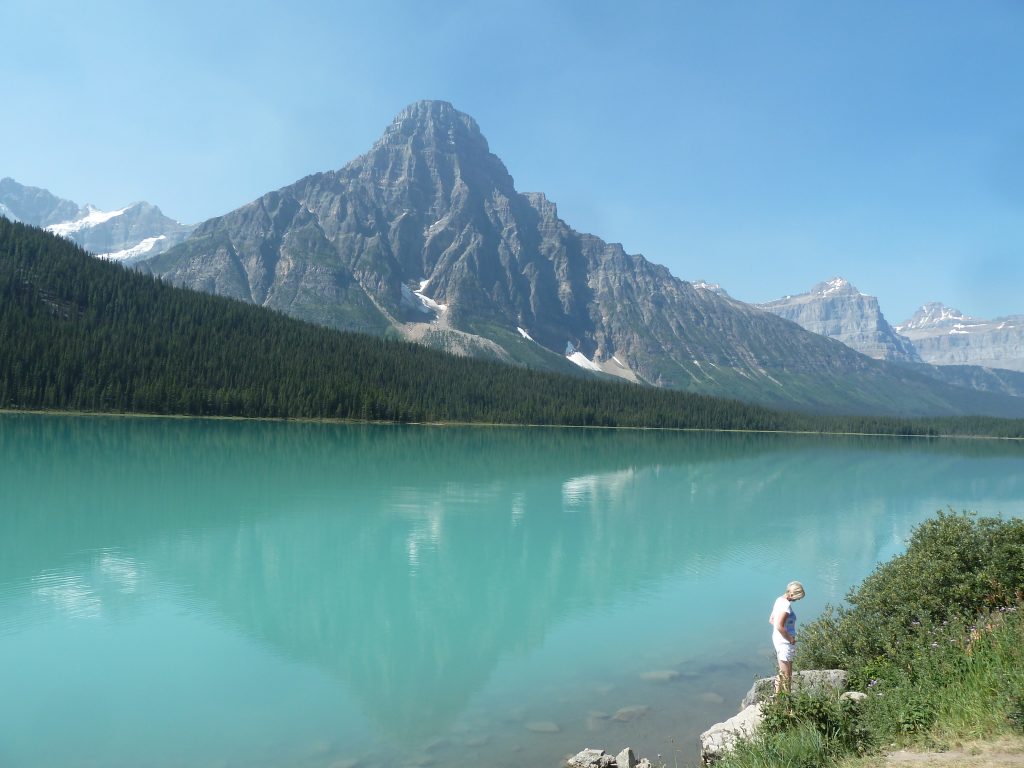