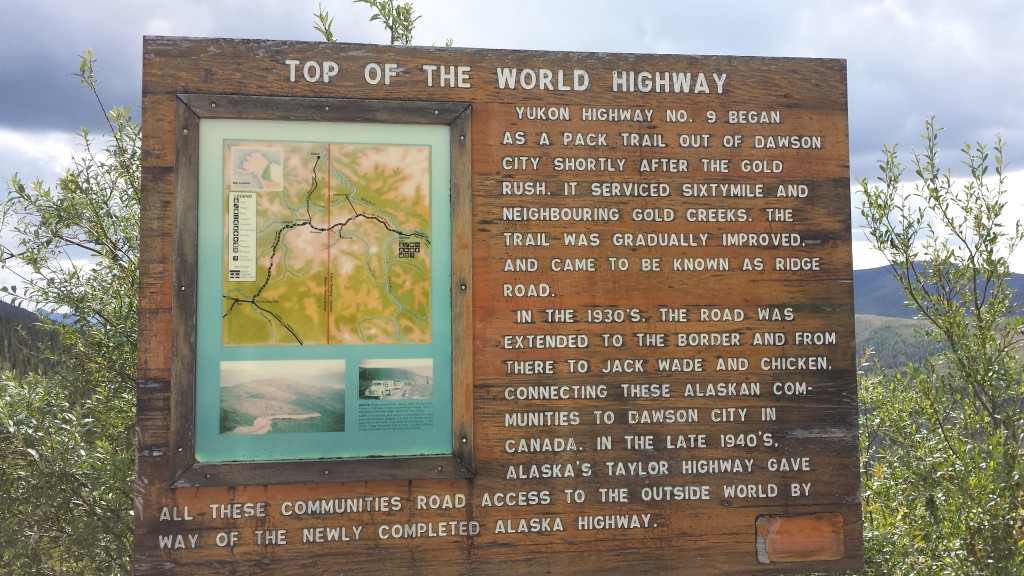 Charlie’s front fork oil seals started leaking after doing the Prudhoe Road, so needed to get them replaced by Yamaha Fairbanks – they said people come in for this job all the time because of the dust and grit that gets trapped.  Will look for some gaiters to put on. 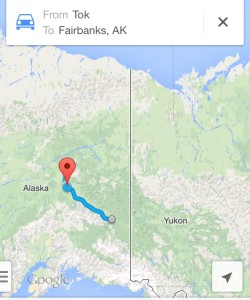 As I have mentioned before, on a previous trip to Alaska we visited Denali, Mt McKinley, Anchorage, Seward – it’s a good journey – but this time we want to cross the Top of the World Highway, so it’s back to Tok.

It was a short ride along the Alaska Highway which in total is 2,285km long, and took just 8 months to build during WW2, to get soldiers and weaponry into the north.  They didn’t do anything fancy like corners, just long straight roads. 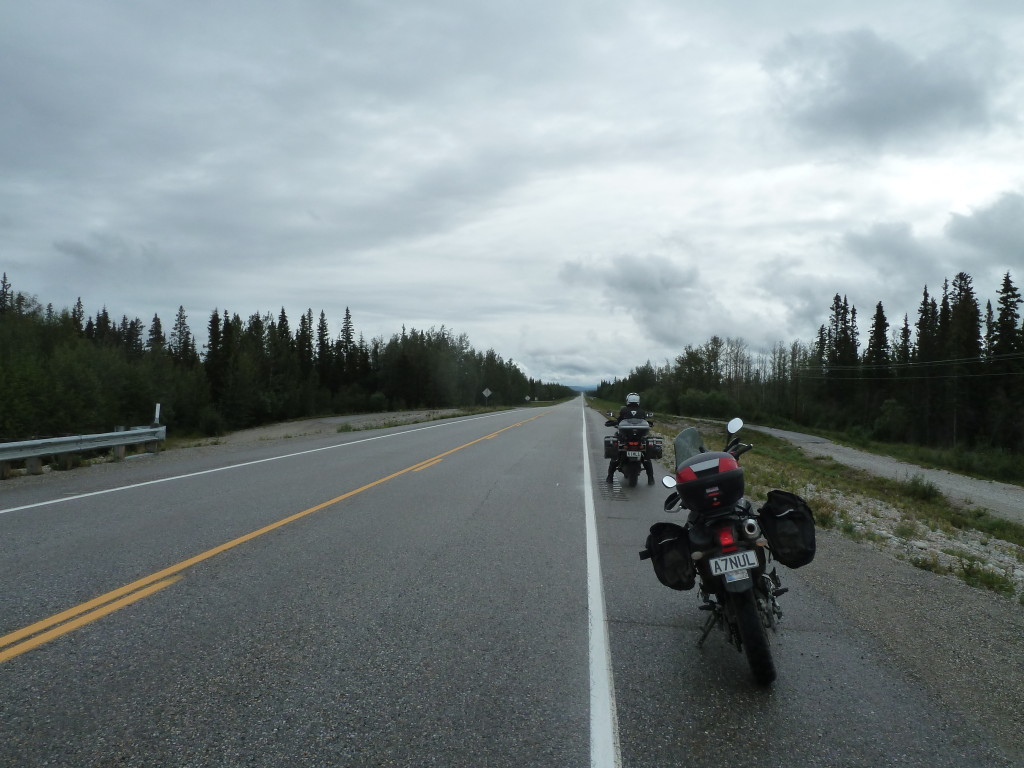 Spring, summer and autumn in Alaska usually lasts for approx 3 months, the rest of the time is winter with temps of -40 to -60 degrees in Fairbanks.  This year though, summer has only lasted 2 weeks and they are even forecasting snow as early as September.  We headed off in cloudy skies, had a bit of rain, but are riding toward sunshine as we head south. 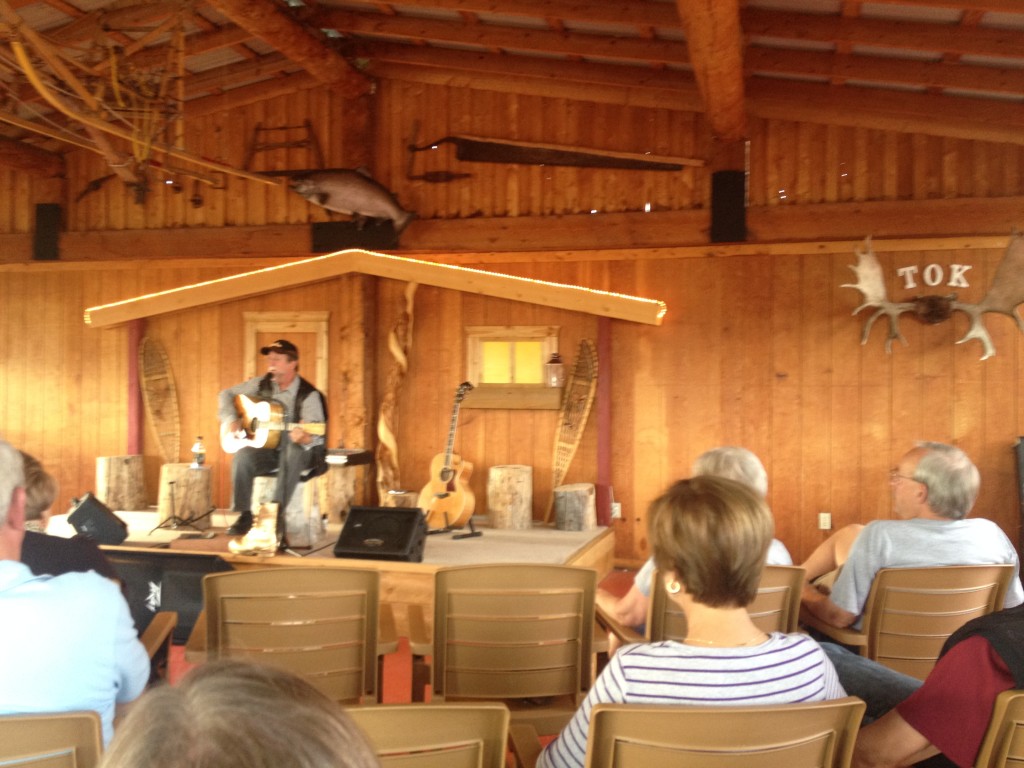 This guy is what is known as a Sourdough – a person who has stayed through a winter in the north, and tells stories through songs and tales.  He was really good and showed us a different side to living in Alaska.  In passing, he mentioned that the temps in Tok in winter are about -83 – I will never say its cold in Auckland again !

Top of the World Highway is a summer road only and was built along the ridges of several mountains, so nearly all day you can see for 100’s miles in all directions.  The road is mostly gravel but the stones are under a layer of dirt, and occasional tarseal.  It had been raining steadily for about 4 days, but again we missed that – we are so blessed – but the consequence was the road was very rutted out and muddy in places.  My bike performs so well on that type of road, so I had a lot of fun 🙂

The only place for a coffee on the way is a place called Chicken, they had a signpost there with all the place names in the world with anything to do with chicken … 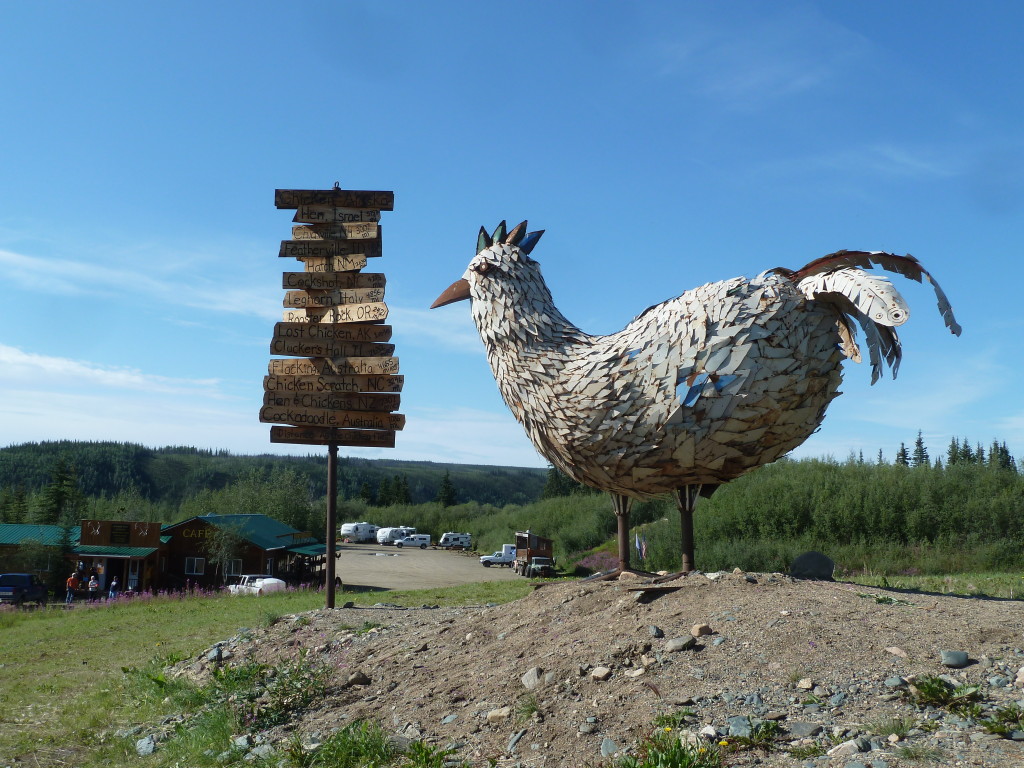 and yes NZ does get a mention … 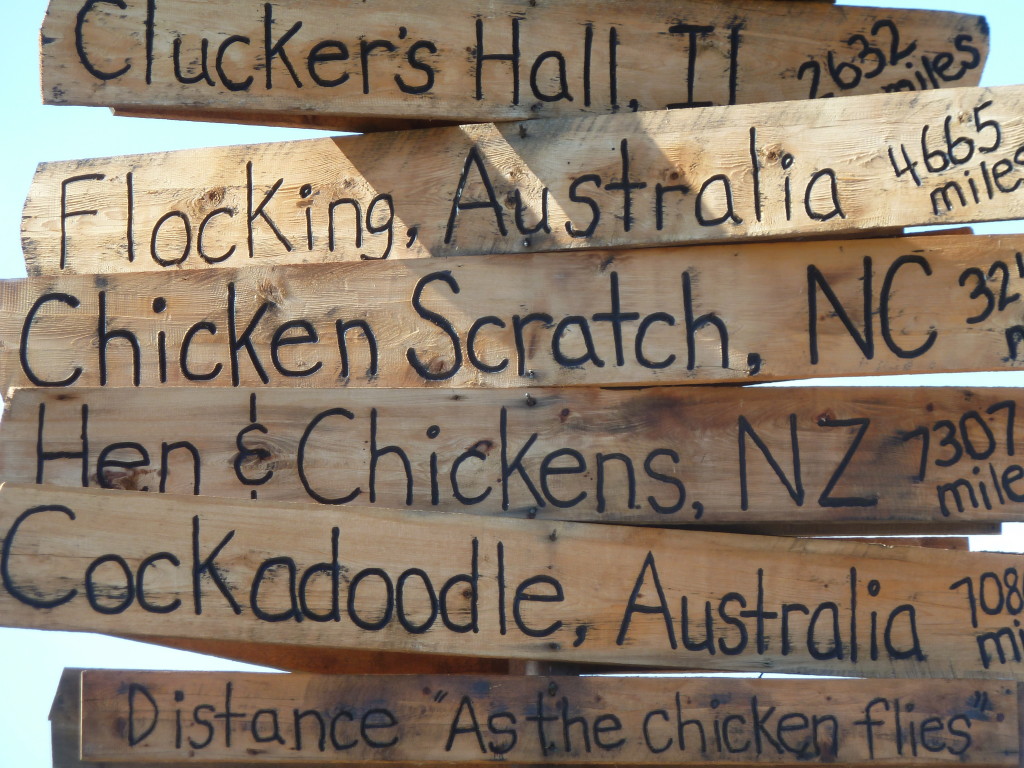 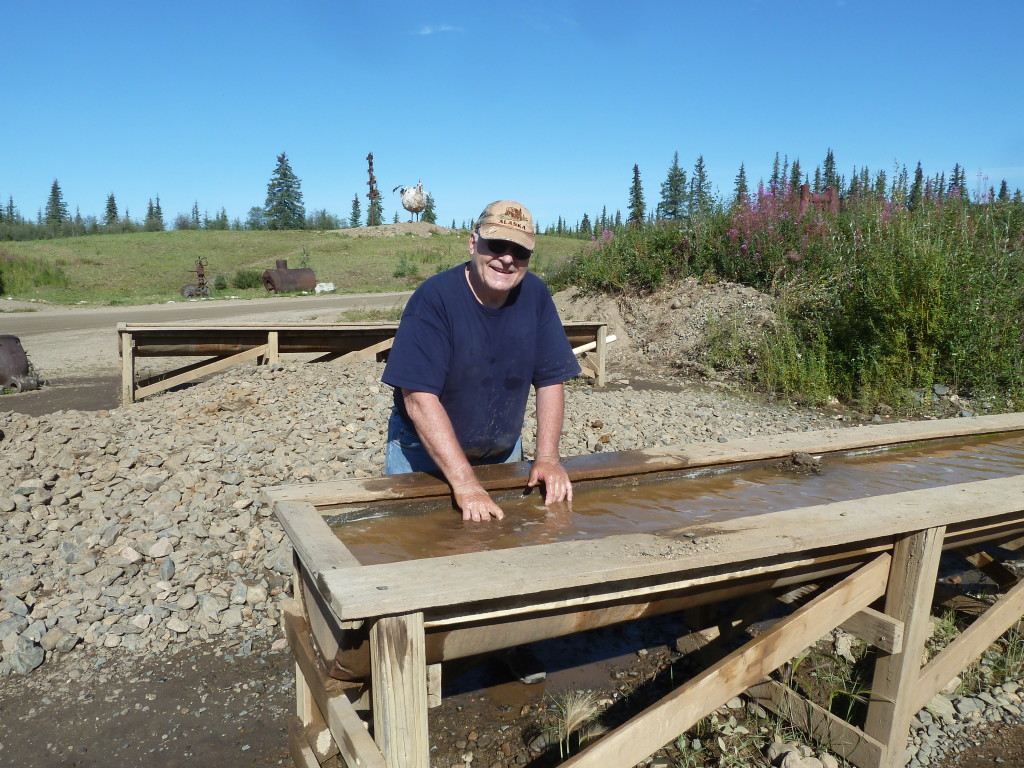 This is Bruce Jackson and he is a seasoned gold panner.  He showed me the process of getting to the glitter, and quite a bit of glitter there was too.  We spotted quite a number of people panning like this along the river. 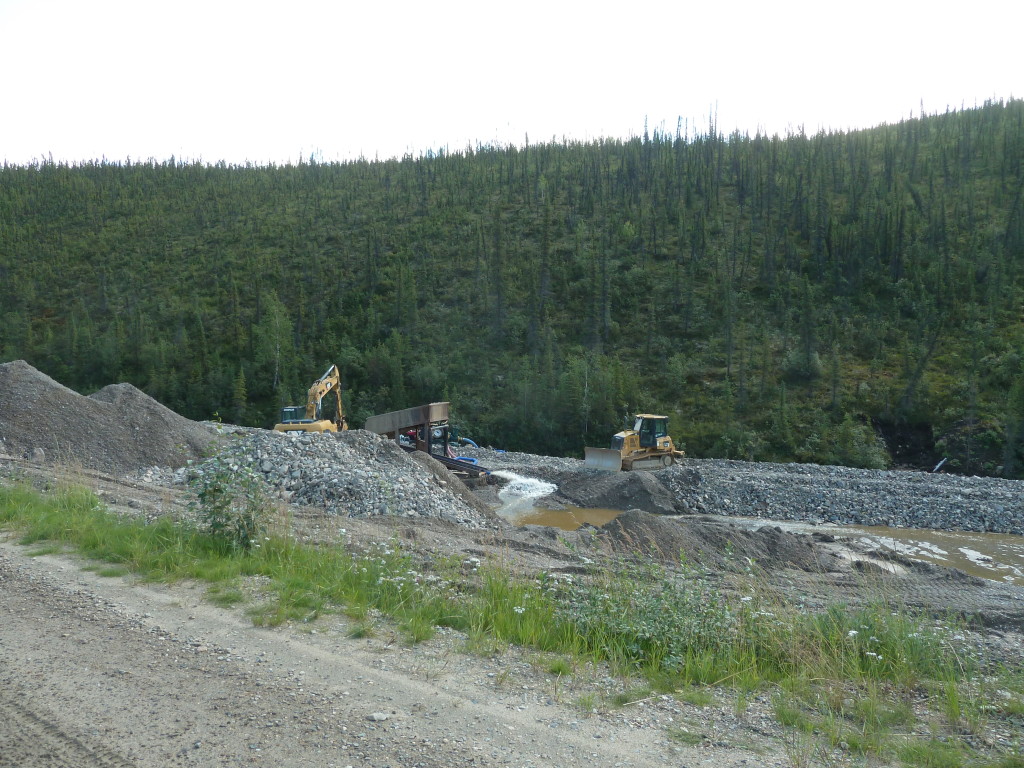 This was another way of looking for gold. 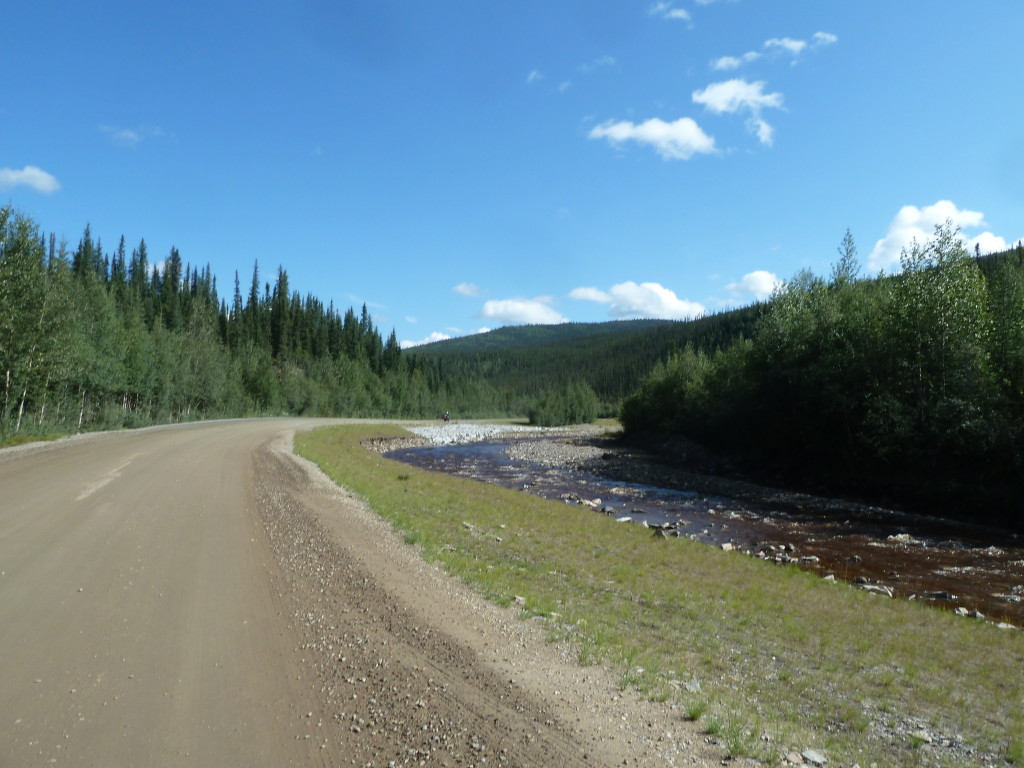 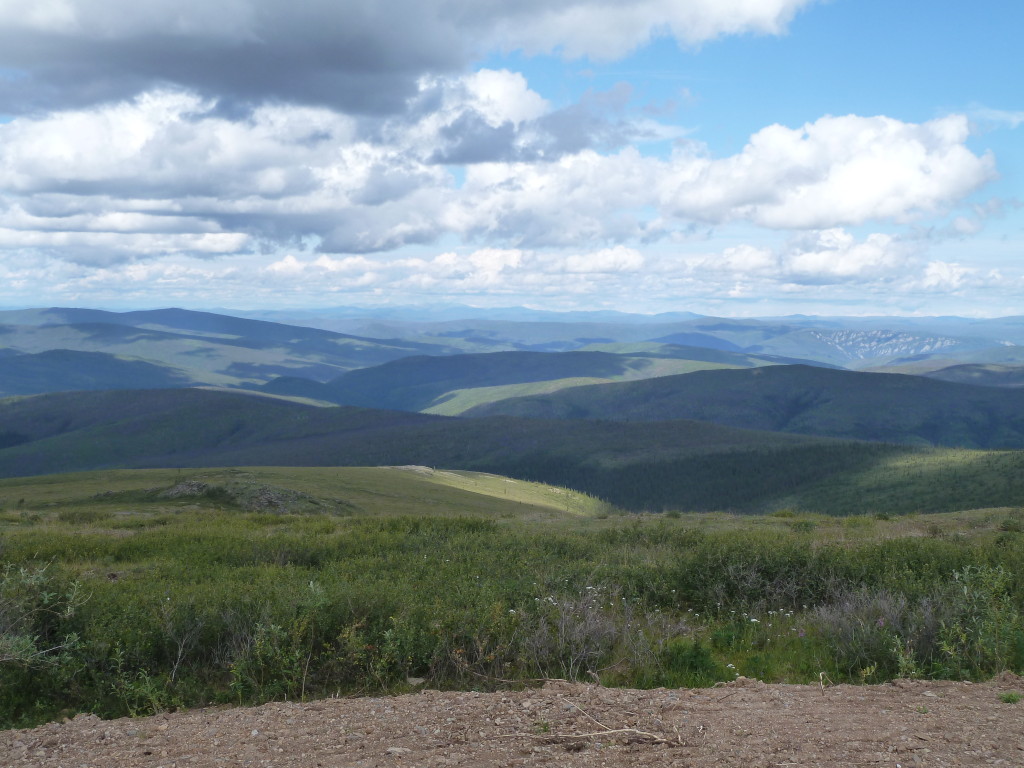 And along a ridge – beautiful all day, a great ride. 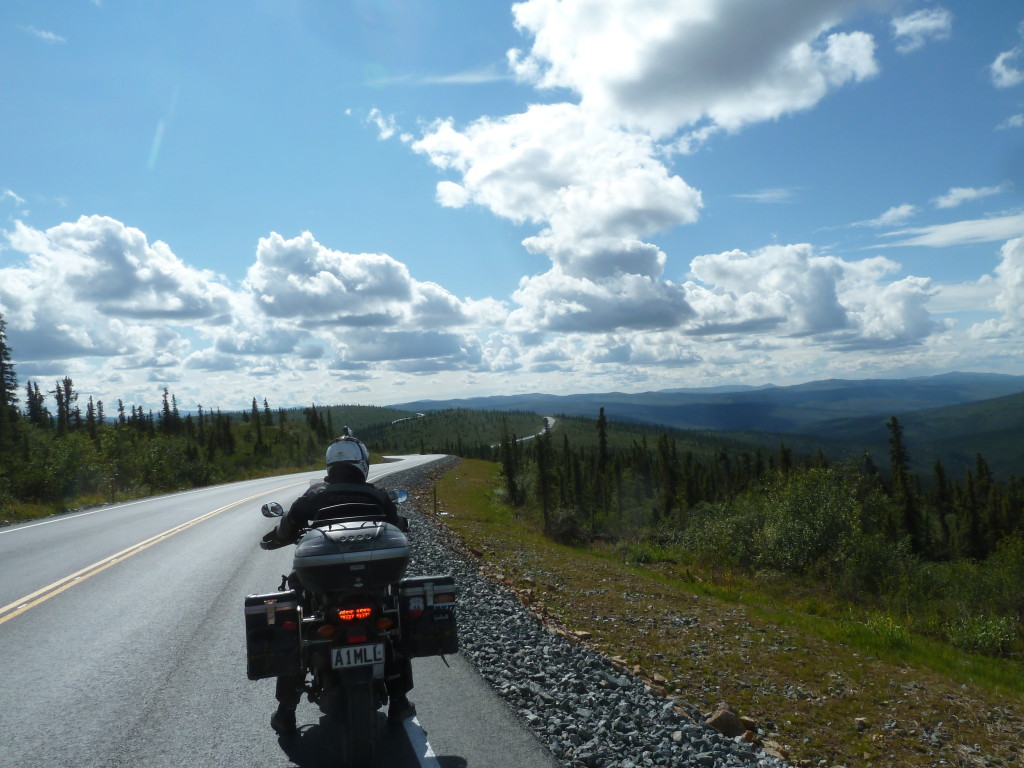 The road was really good as we approached the USA/Canada border.  Goodbye Alaska, hello Yukon. 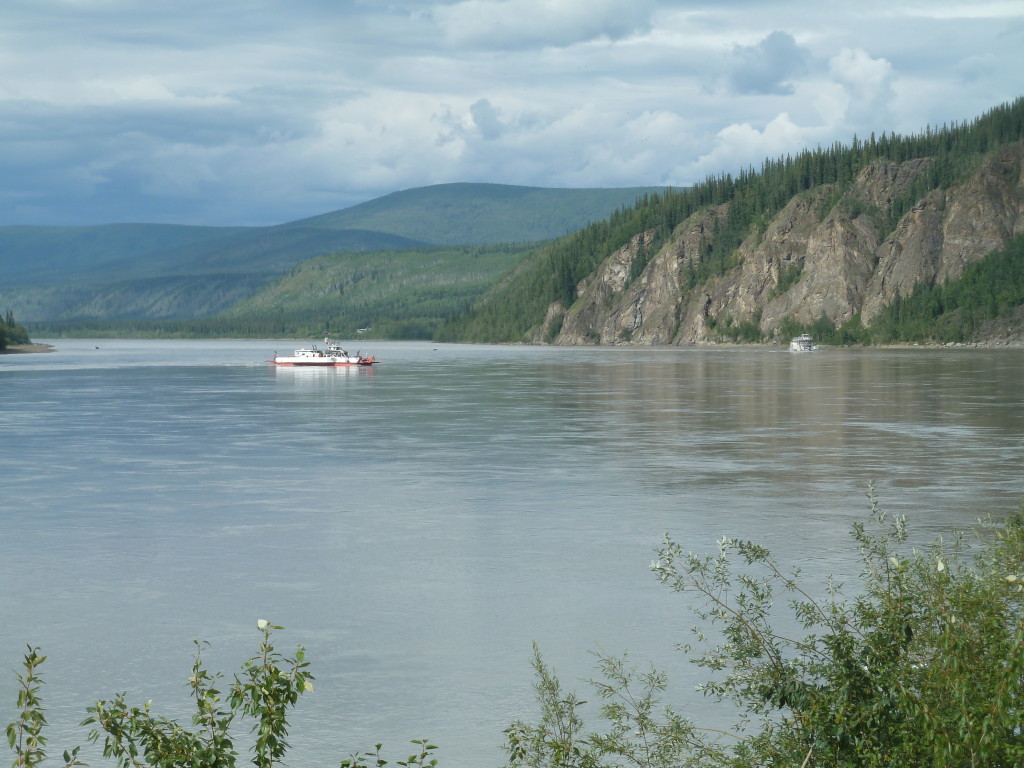 To get to Dawson City, you have to take the car ferry across the Yukon.  We were squeezed on at the last minute.  I felt my front wheel was almost under the big bus camper in front of me, and there was only a little chain behind me.  When the ferry swung out into the river it felt like I could easily fall off! 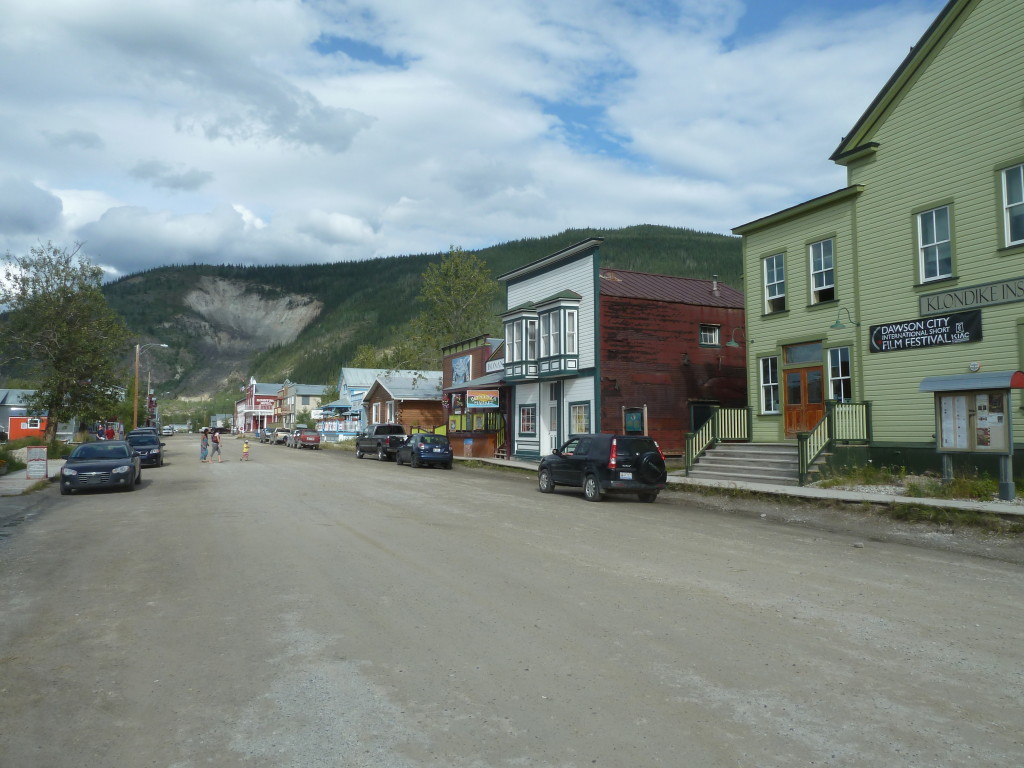 This is quite typical of Dawson City – wide gravel streets, old buildings.  Although touristy, it still does have an authenticity about it.

We got in quite early so wandered around town for a bit, then took a walking tour on the strange things past and present that have happened in Dawson – like the SourToe cocktail – its a real toe in a shot of hard liquor and you get a certificate if you drink it – I couldn’t even go look at it!!  but there are 1000’s of certificates in the world from the many visitors and most of the locals that have done it, eeeewww. 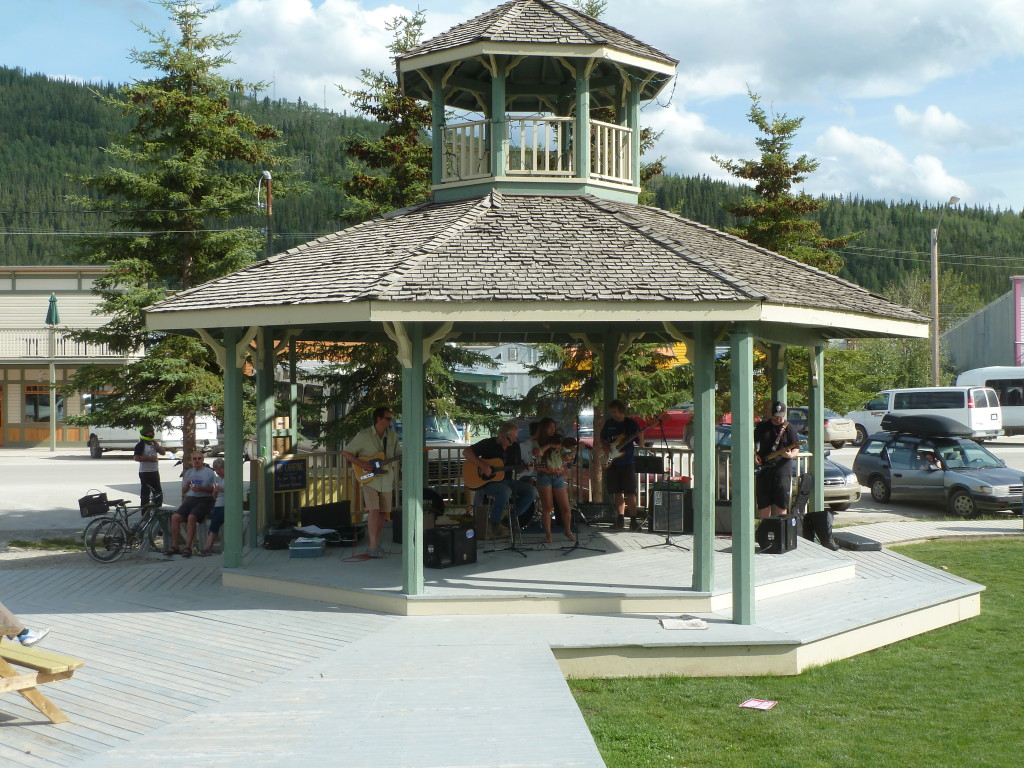 Dawson City is known for its Arts – these locals were just having some fun playing together in the park, we sat on the bank and listened for a while and they were good too.  Some of our good friends that have travelled with us I think will be very impressed in how we are taking time to “smell the roses”. 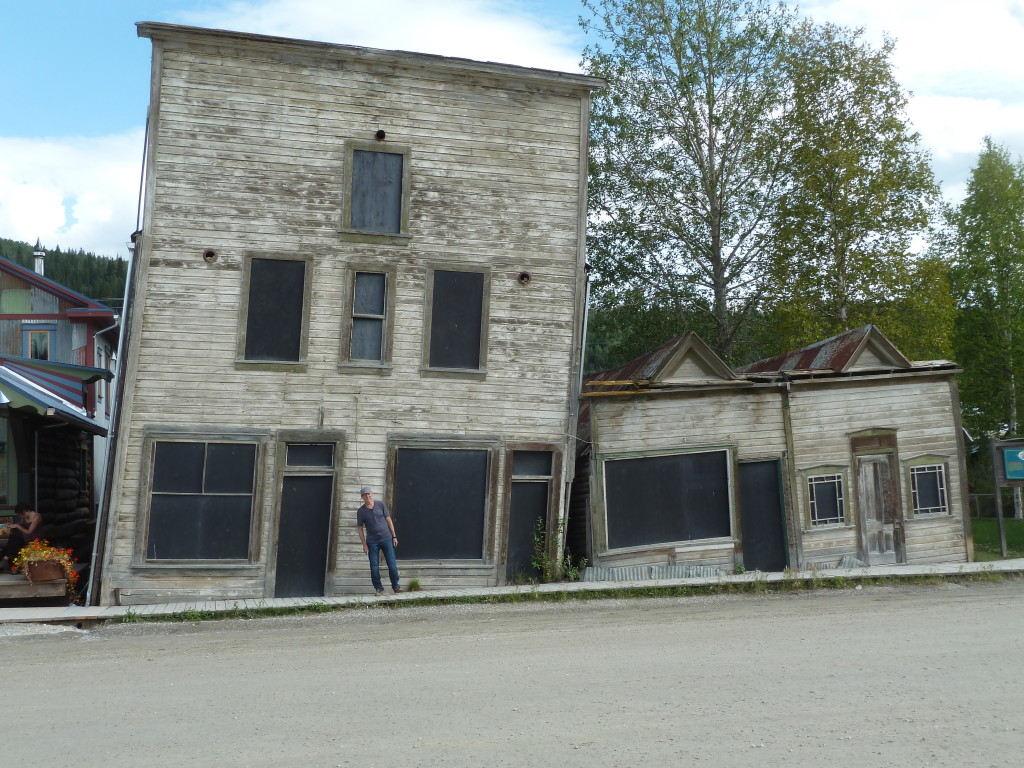 Long term effects of permafrost if you don’t have air circulating under the building.  Even Charlie is on a lean!

A good run through to Whitehorse – but we are soooo over road works.  We had 4 long sections, 2 of which were a bit like trying to ride on marbles.  At one point we were pushed off onto the side of the road by a truck, on a corner, and were both fishtailing, big time.  But just opened the throttle and all was well.

By the time we reached Whitehorse, both us and the bikes were covered in dust so going to take a day tomorrow to clean up and Charlie is going to do an oil change on my bike. The Yamaha guys at Whitehorse are a good lot – they can’t do the job for us because they are busy, but offered their workshop for Charlie to do it. 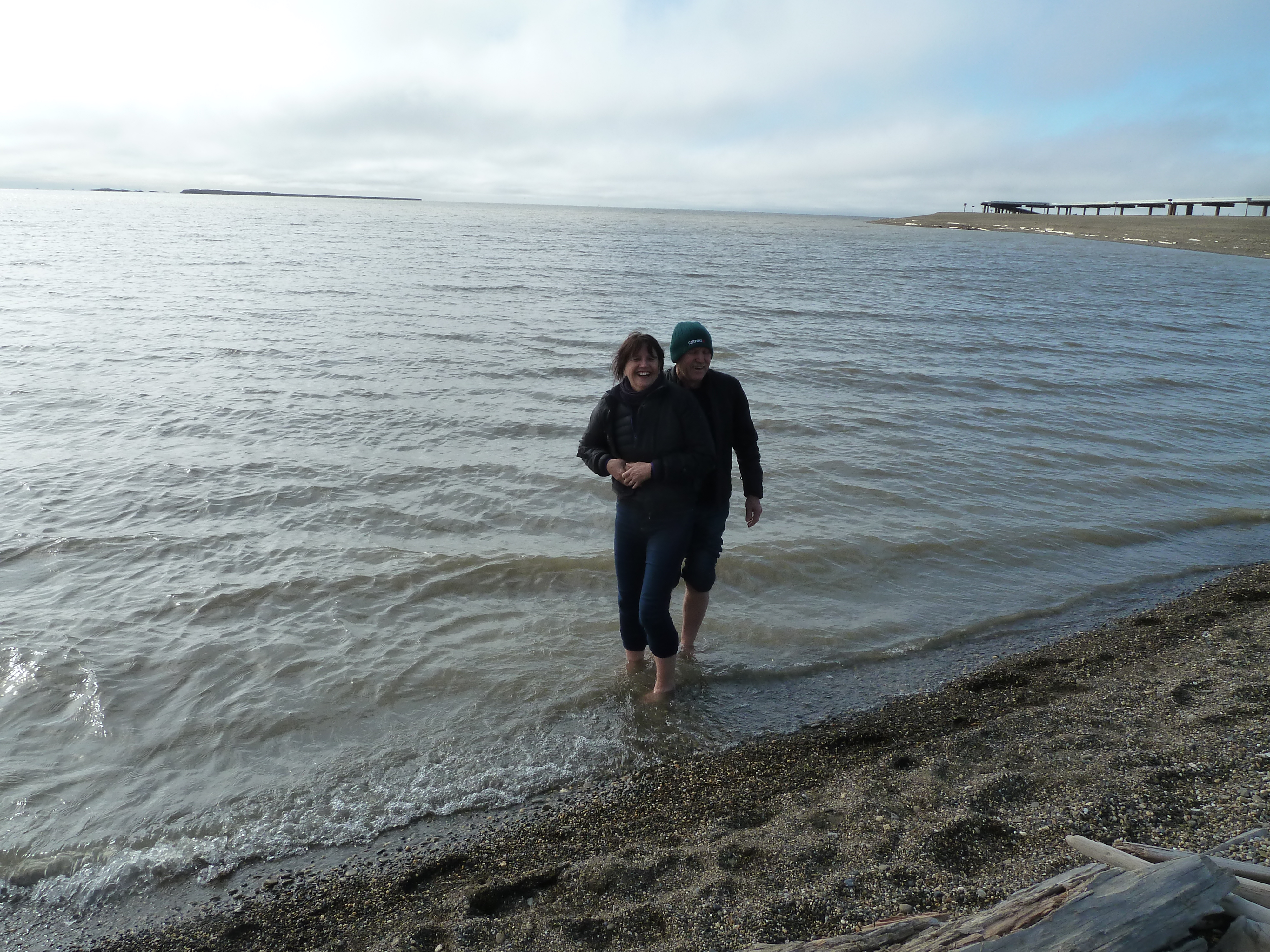 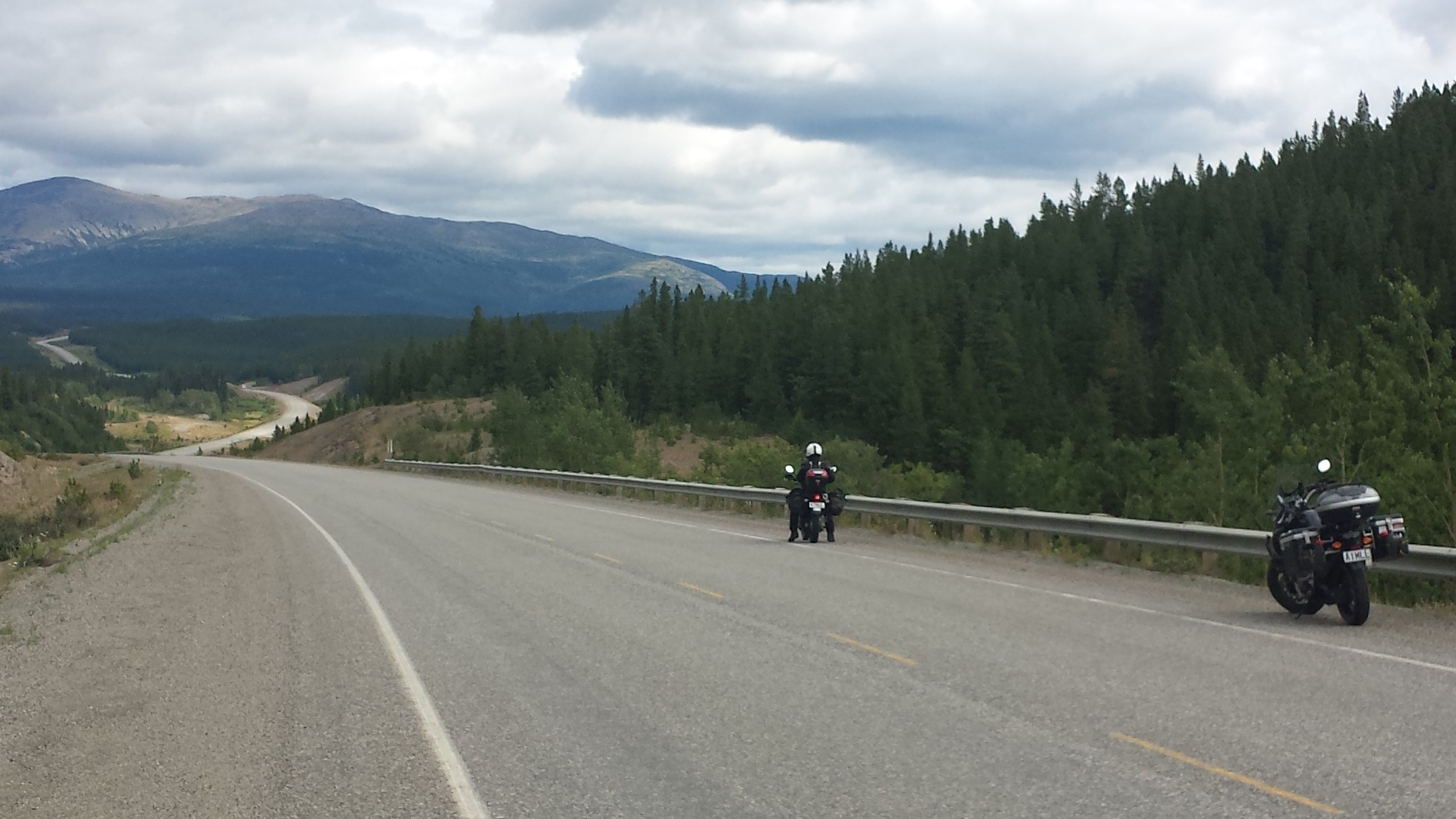