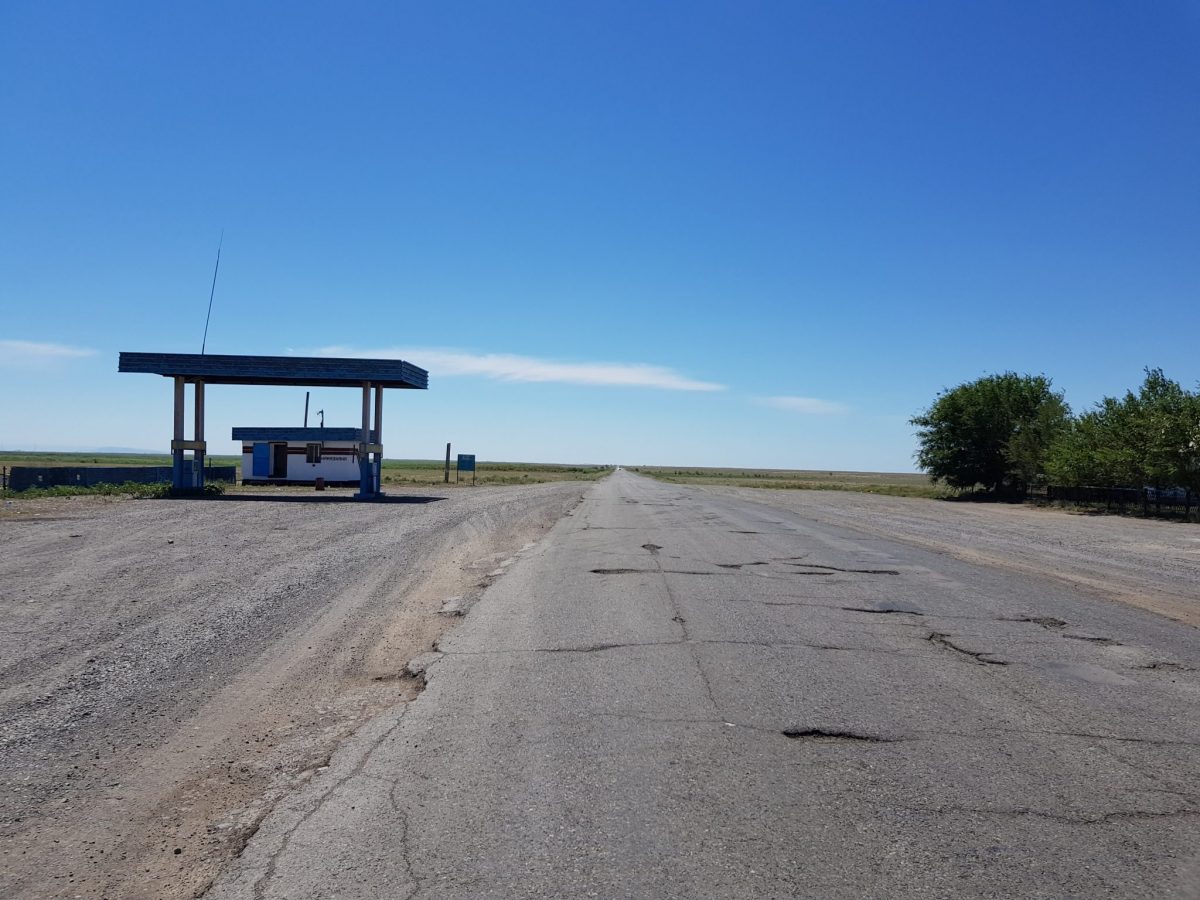 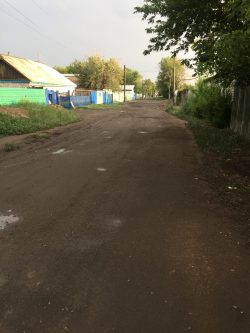 Walking the streets of Ayakoz

There is a whole lot of flat emptiness here in Kazakhstan.

We finally rode over some hills, the first since the Altais when we left Mongolia.  Later we had higher hills on our left and totally flat stretching out as far as you could see on the right.  No foothills, just flat then up. Later again, we had some snowcapped mountains in the distance on the left.

The road was either pavement or broken pavement – cars use the whole road to get around the rougher bits.

At one point the speed restriction was 70 – I looked at Charlie ahead of me, everything was bouncing, the bike, the bags, him – and he was laughing away – I thought if he even tried to get anywhere near 70 he would launch himself!

Every town has its cemetery either next to the road or on a slight high point, some of the tombs are very elaborate.

Selling fish on the side of the road

The Police here have quite the reputation of being corrupt, they will stop you for anything and demand large fines which go into their pocket, even the locals will slam on the brakes if they think they see the Police hiding waiting to catch them.  We are trying to stick with the rules to hopefully avoid any hassle.

Taldykorgan is a very clean modern town, it even has street lights, both functional and decorative, and a garden down the centre of the main street.

It was 29 degrees when we were packing up the bikes, swelteringly hot even before we put our bike gear on.  However once we got going it was just fine with the wind keeping us cooler.

As soon as we left Taldykorgan we began to climb into the hills – it was just stunning, really enjoyed the different scenery.

We are taking a bit of a detour to Charyn Canyon.  This was a great choice, a good road winds through some hills, through farmland, and later through a Canyonlands type area.  Of course in between are the inevitable vast flat plains.  When we left the Altyn-Emel National Park area we dropped down to the desert, and it was hot!!  It was 39 by the time we stopped at our hotel in Shonzy, but it had been much hotter in the desert area, must have been in the low 40’s at least.  Our Klim gear proved great in the heat, they have good ventilation so we get good airflow around our bodies.   Earlier on the trip the gear also proved itself in the rain, so a good investment.  It was too hot to have the helmet visor open to the hot wind, so again the ventilation in the helmets worked well.

I wear a camel pack when riding and sip often.  In no time the water was hot so I just told myself that it’s just like a cuppa tea, only with no milk…or tea – perfect.

Big blooper today.  I was taking loads of photos because there was so much to capture, like the road covered in sand as we crossed through the desert etc etc only to find when I downloaded them tonight, that somehow I had put my headcam on video mode … Oh no !!!!  No photos from me for today !!! 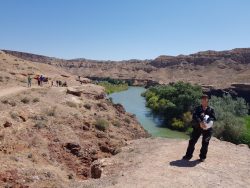 We visited the Charyn Canyon today – first to the lookout from the bridge.  Charlie went to the point to see what was around the corner, meanwhile, I got hit with paparazzi wanting to take photos with me – all part of the fun. 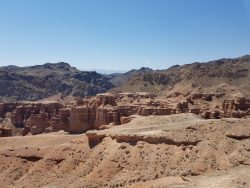 Charlie then rode the 10km out to the lookout point but it wasn’t enough of a drawcard for me with the heat, dust, and washboard so I carried on down the road about 20km and happily had some alone-time in this bus stop, thinking of my friends back home heading into Summit Conference. 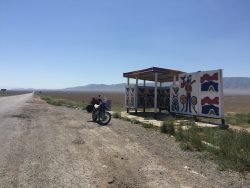 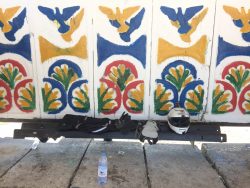 Seen quite a number of these statues around, either eagles, male goats with big horns, and others – haven’t found out what they mean yet.

We then carried on to Almaty and at our hotel we met another rider who had come from the direction we are heading, a time to share tips.

Next day we wandered around the lovely city of Almaty, it has a good cafe culture and we had the best flat white since leaving NZ – a taste of home. 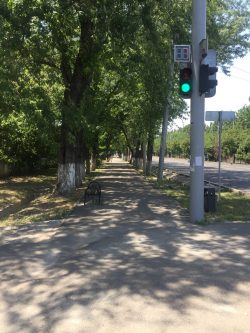 The streets are lined with trees so we were able to keep out of the direct sun most of the time. 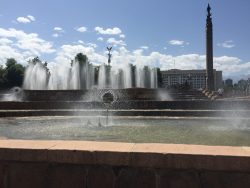 They have a lot of fountains here, the water sounds so refreshing.

We took the gondola up to the lookout.  There is a fairground area there, plus a mini-zoo – the large animals had very small enclosures. 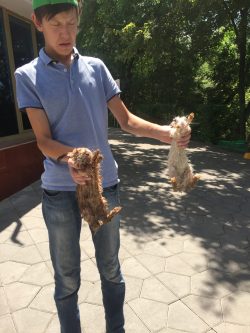 The kids get to hold rabbits – these two were getting cooled off, they must get so hot with their fur. 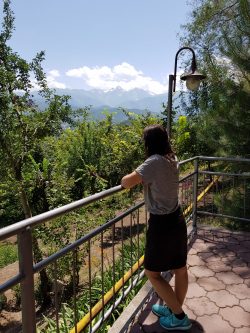 The mountains above Almaty with snow and we are in heat of high 30’s. 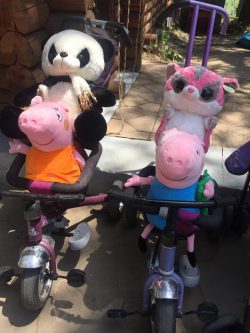 This is for Mackenzie –   a big Peppa Pig fan 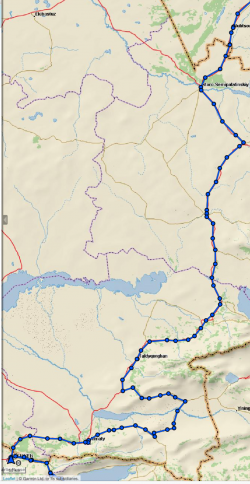 Our route through Kazakhstan

Tomorrow we head to our next country – Krygyzstan. 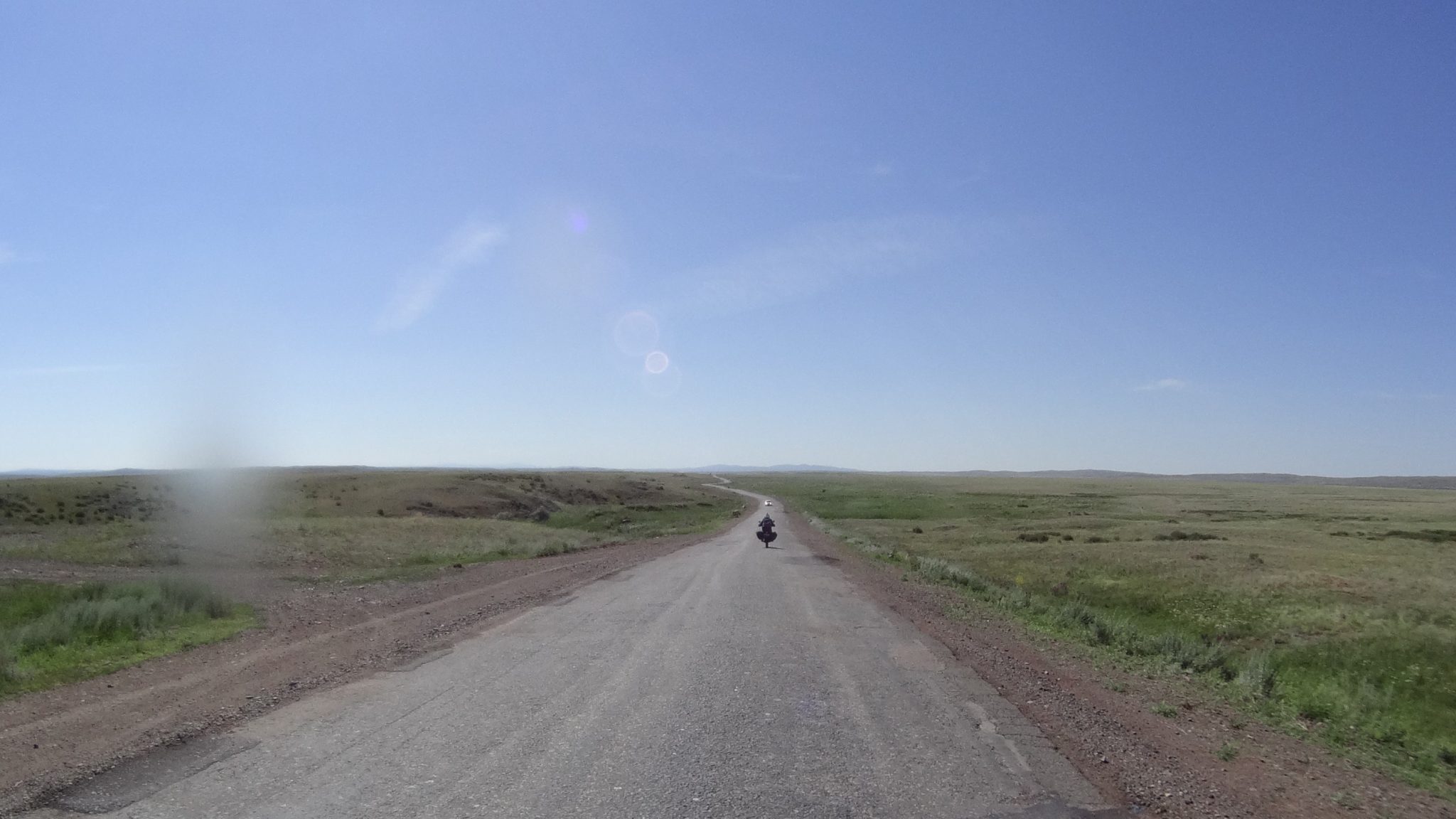 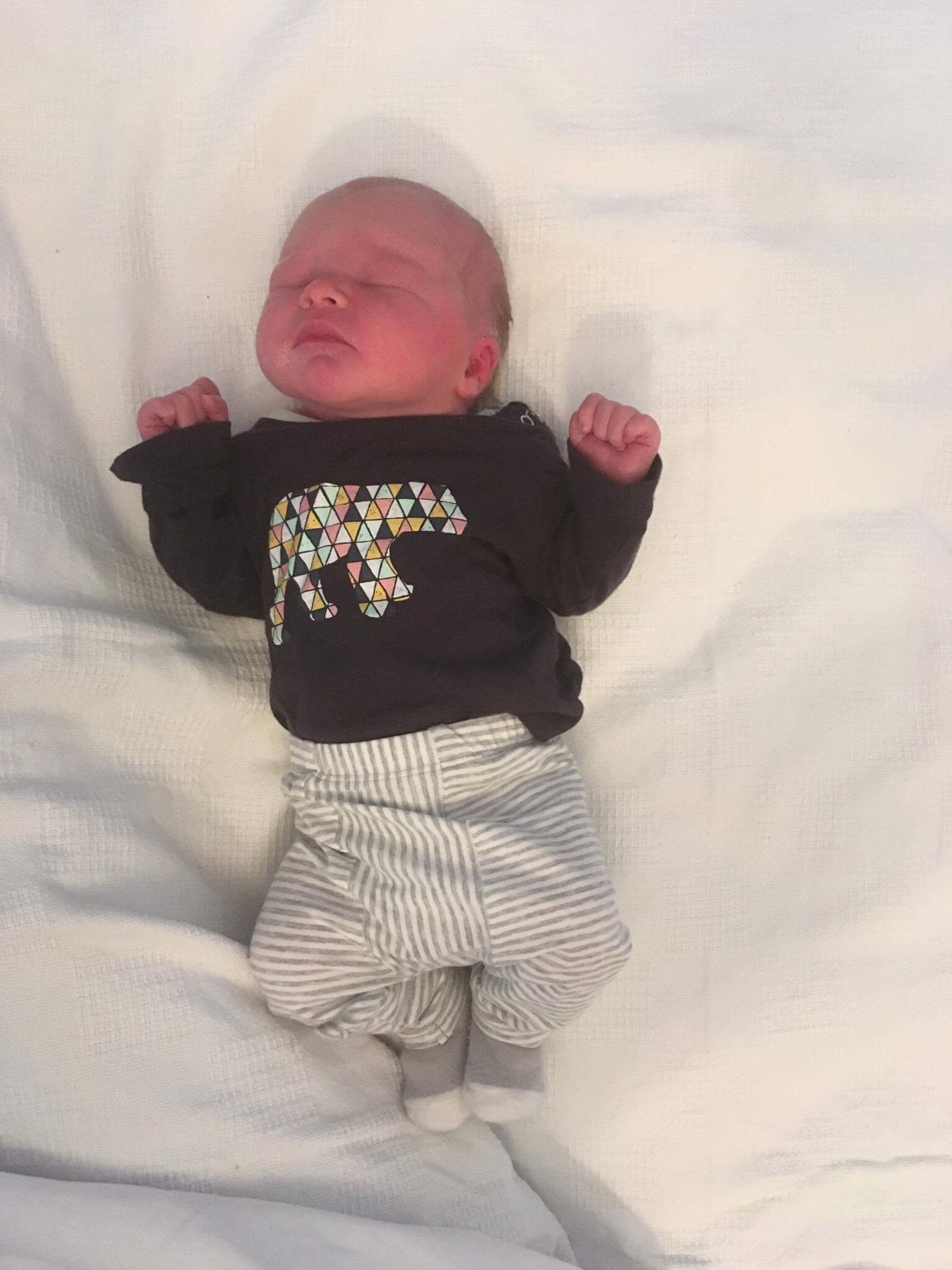