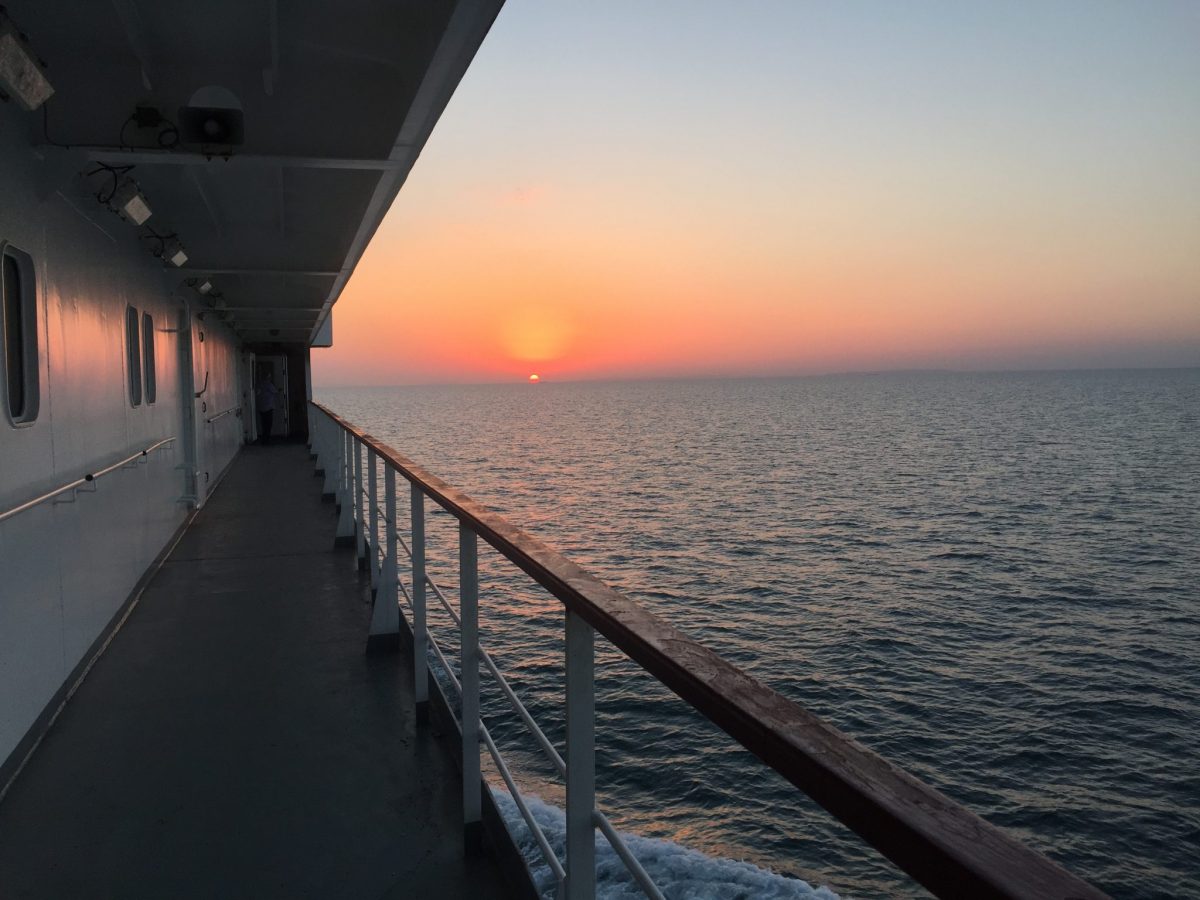 Our plan is to take a ferry to Baku in Azerbaijan, but there are a number of variables with the ferry timetable – if there is any wind the ship can’t sail because of the shallow channel, if there are not enough trucks then it will wait until there is to make the trip economic, and if the port is full in Baku we could be waiting 2-5 days to disembark.  Consequently there is no set timetable – if a boat is in, good, if not then we wait until there is one.

The next morning our guide kept making calls to check the latest information – it is so good having a guide to deal with and organise all this stuff, we have appreciated all that he has done.  He came with the good news that we have a boat today so off we went to start the exit process.  No taxis available at the hotel so it was in to the bus we went to take us back to our bikes.  I thought after a few stops that they couldn’t possibly fit any more people in – how wrong I was, there was apparently plenty of room for loads more.

We got to the port terminal at 1:30pm and the first part doing the paperwork for the bikes took about 2hrs with lots of pieces of paper and receipts at the end of it.  Again, very good to have a guide to make the process faster.  We loaded the bikes onto the boat and then had to wait in the terminal for the trucks to load, then for the drivers and crew to be processed through Customs, then it was time for the passengers to board.  This may sound like a straight forward easy process, but it was 1:30am before we got on to the actual boat, and then 3:00am to wait to secure and pay for a cabin.

Getting through Customs was quite the experience.  We were with a young French guy at the front of the queue as suggested by our guide, and we had been there the longest so was easy to position ourselves there. Everyone was waiting patiently then one guy came and jumped to the front and was yelling at the police and army guys, really argumentative.  This stirred everything up and it was all on!!!  Then the pushing started.  Wow!!!  Serious business.  We hadn’t caught on to the system yet and people were pushing in from the sides and getting through before us.  The Police were guarding the door and managing how many people came through at a time.   The guy in front of me was like a big block so when he eventually went through to Customs I practically fell through behind him, except the Police said I couldn’t come yet and were pushing me back through the door into the crowd – definition of impossible against the tide of those trying to get through that little door – I was trying to get back but just couldn’t get my foot in anywhere, so they opened the door again and pulled me through.  The French guy threw his pack partway through and I dragged it in to the Customs area.   I was laughing, quite the experience as I said, but perhaps not the right demeanour to approach the difficult Turkmenistan Customs authorities.  However they all broke out into smiles and chuckles so all was well.  Then they wanted my passport, well, Charlie had it back in the mayhem – so they opened the door again and pulled him through keeping everyone else back except the young French guy managed to stick with us.  All of this while carrying helmets and luggage, in bike gear and boots.  Seriously, after the initial surprise as to how everyone was behaving, I did see the funny side of it all.

Then it was onto a minibus to the boat and once on board we could then book and pay for a cabin – except the cashier hadn’t arrived yet and by the time she did there were so many people wanting the limited number of cabins.  But we got there, at 3:00 am, had a great shower, and to bed.  What a memorable experience hahahaha.

A number of Turkmens speak English and we had a few of them apologise to us for the actions of others, they were embarrassed.  But we are not there to judge them or criticise, that is just how it is in Turkmenistan, they have to live with it, we just get to experience it once, so it was no problem.

We woke at 7:30am and Charlie went outside to see the Caspian Sea from a boat – what a surprise when he stepped out on deck to see we hadn’t even left port yet – leaving Turkmenistan just keeps on going like the ever-ready bunny.  Finally at 8:30am we headed out to sea. 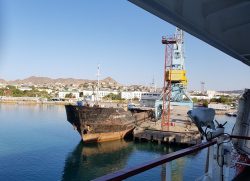 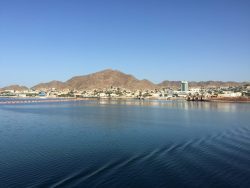 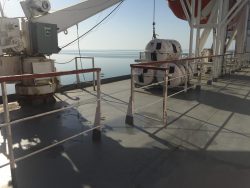 There were several of these open gates all around the boat, a bit of a worry as there were young children on board 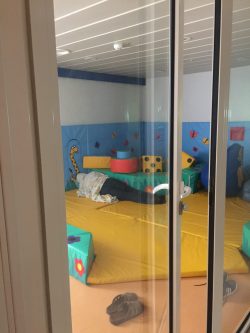 People were making themselves comfortable and sleeping anywhere, this guy was in the kids’ playroom

We spent the day chatting with others 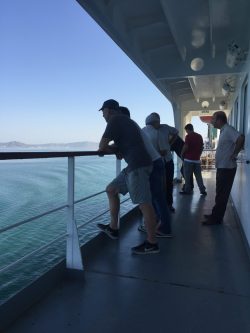 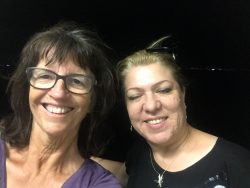 This lady is from Azerbaijan, lives in Turkey, and teaches Russian.  The family had all gone to Turkmenistan for a wedding which lasts three days – first the bride’s wedding, then the groom’s, then together – with fabulous dresses for each occasion.  What a mammoth effort organising all that!! 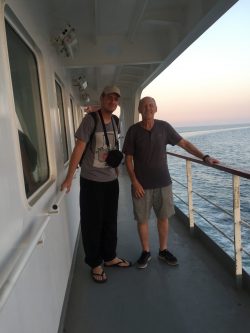 The French backpacker we befriended – Jacobe 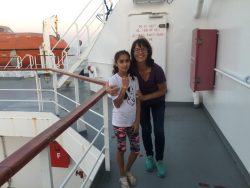 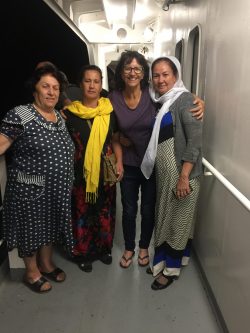 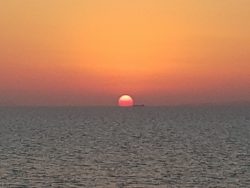 A sunset on the water is always stunning

There was limited food available for sale but because that is not always the case we had also taken some food on board with us.

Coming into Baku at night was lovely with all the lights, they put on quite a show.  We were delighted that we went straight to dock at 8:30pm, one guy had been telling Charlie how he had to wait 5 days one time.

Then the disembarking procedure.  We were drivers and so were taken off first with the truckies, at 10:30pm, and put in the front of the queue for Customs and Immigration – did we have a drone, weapons, grenades, gold or diamonds – no.  We then had to wait until all the drivers had been processed then some more time passed until finally the ramp came down and we could get to our bikes, 1:30am.  Next it was off to another Customs office for us to pay for insurance $7US for both of us, and we got away from there about 2:30am.  Then we were free to go, but, there was a sting in the tail we hadn’t expected.  Because of the potential delays and the lack of wifi in our last hotel, we had not been able to book a hotel.  However, I had a list of 4 that would be suitable so off we went.  What we didn’t know was that there was an International Scout Conference on and the hotels were all booked out.  So here we were riding around a new city in a new country, and by attempt No.5 we finally found a room and so we got to bed at 4:30 am, except, that Baku is an hour behind so for us it was 5:30am!

So Turkmenistan for us – we are grateful for the freedom we have in NZ.  They really don’t encourage tourists to come because of the influence they can have on the people, so they make it very difficult.  On a Transit Visa 50% are denied access with no apparent common thread as to why – a pillion might get a yes and the driver a no.  I know of others that had no trouble, so who knows.  On the advice of our agent in NZ (Silk Road Adventurers) we opted for a Tourist Visa so we had to have a guide and driver, the cost was expensive with the hotels chosen for us, but having said that, having a guide was a great advantage and we not only learnt a lot but he also took care of the tricky bits.  We are both happy to have travelled through this country and experienced a different way of living under authority. 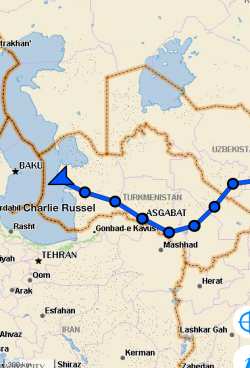 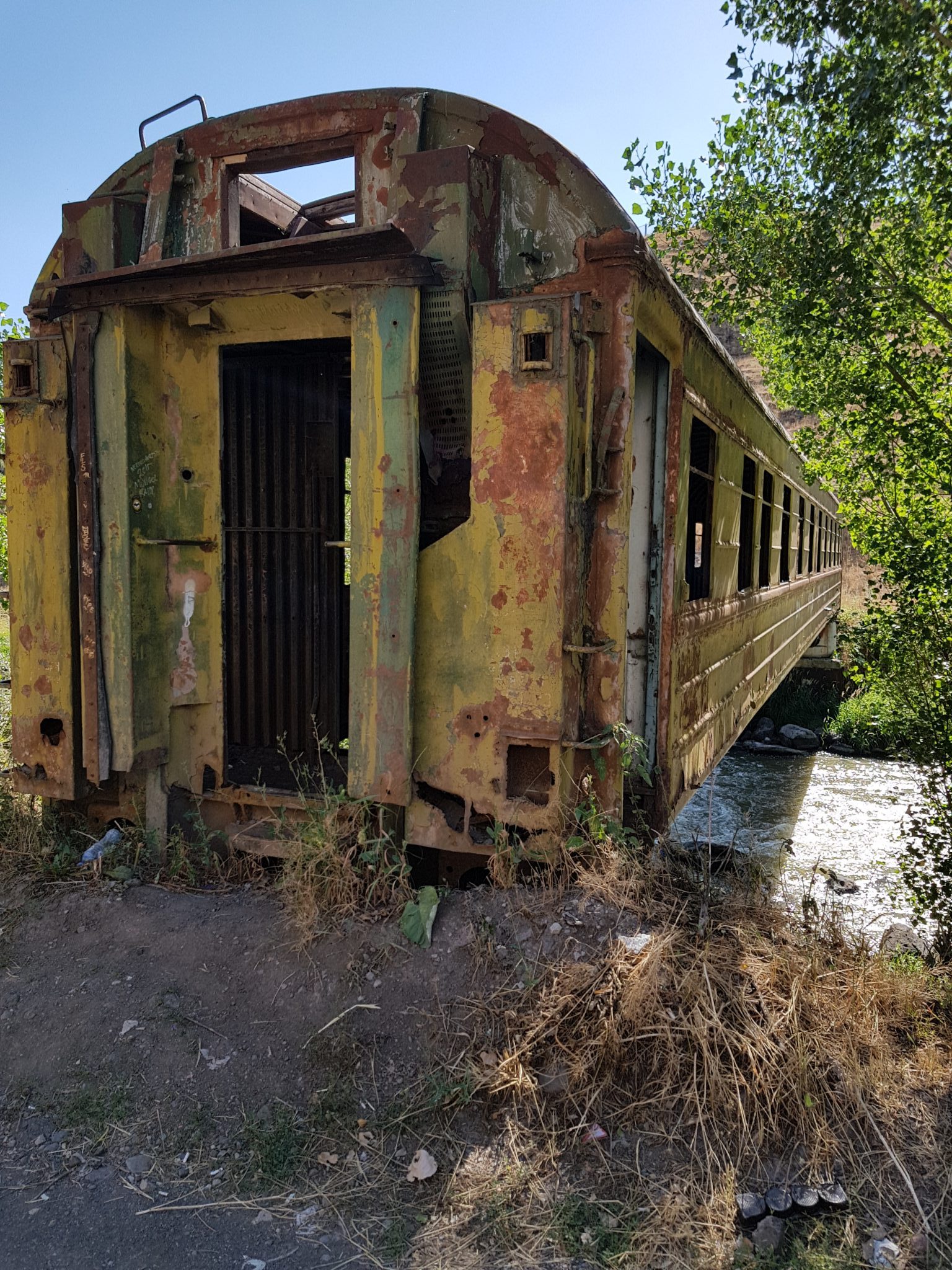 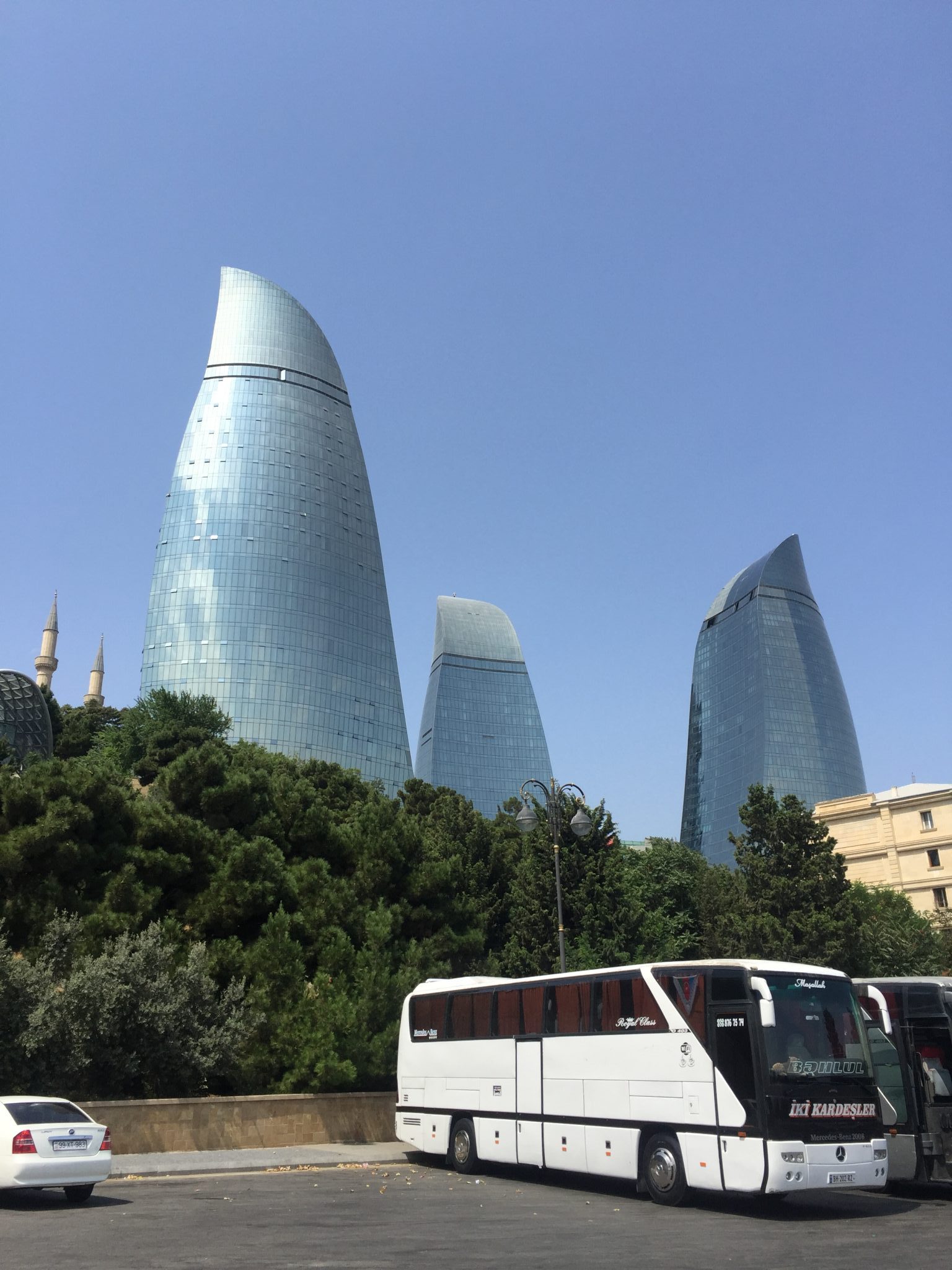