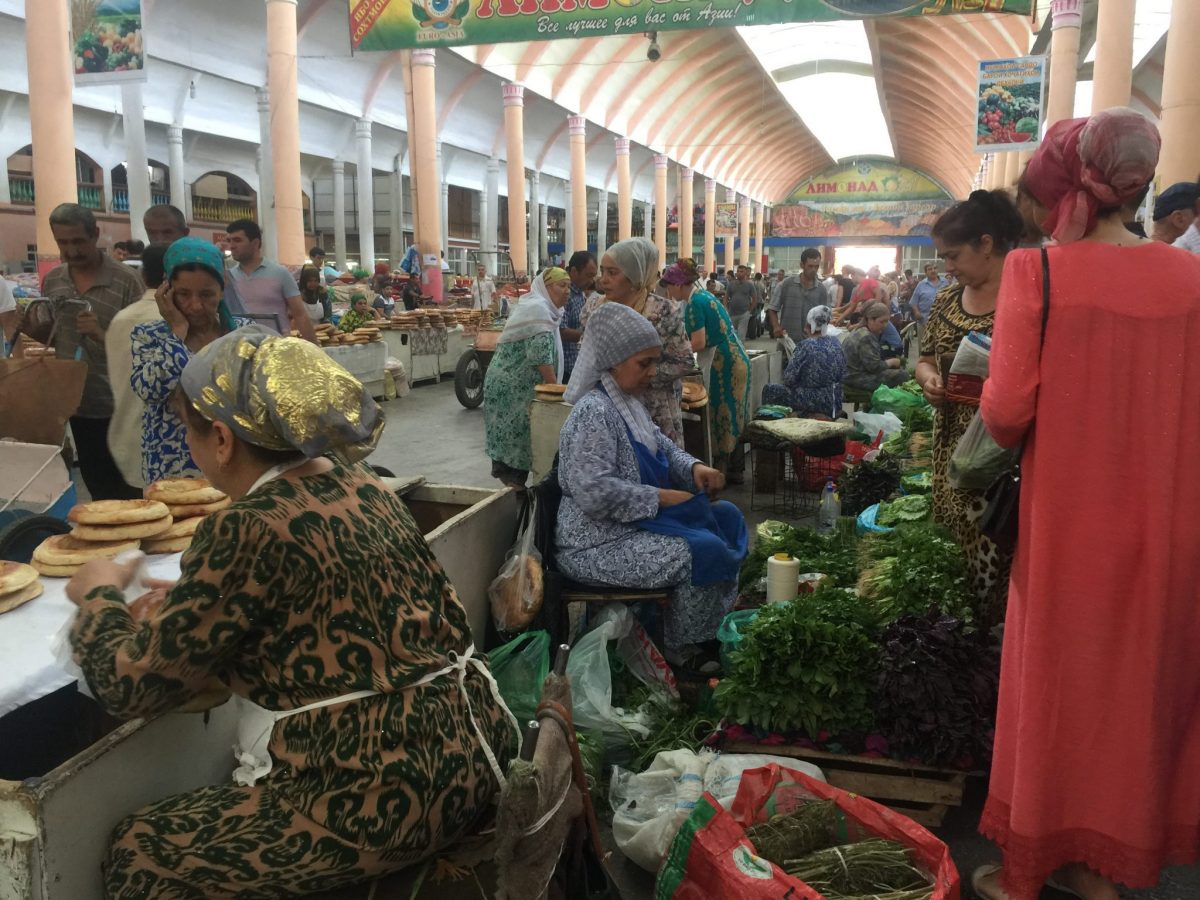 Leaving Osh we travelled through a fertile valley between two ranges of mountains, lots of crops, and also lots of traffic. 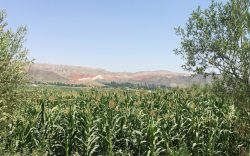 Then later through some hills

This area has “islands” of Tajikistan and Uzbekistan within the borders of Krygyzstan, they are called enclaves.  In days gone by it was difficult to negotiate your way around these, the locals could just follow the road through the borders, but tourists had to navigate their way around them.  Fortunately now there is a new road that does that for us. 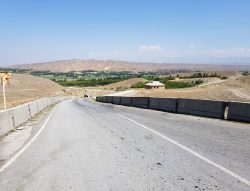 An enclave of Uzbekistan – the green oasis bit – completely surrounded by Krygyzstan. 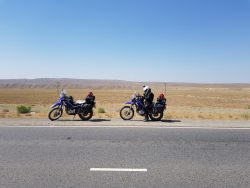 Here you can see in the foreground Krygyzstan, then by the poles is Tajikstan, and beyond Uzbekistan – I don’t know why it was divided like this??

Still not feeling great so doing short distances.  Some pics of the town we stayed in, we attract a lot of attention. 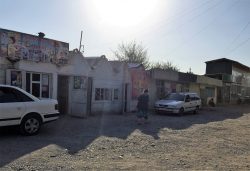 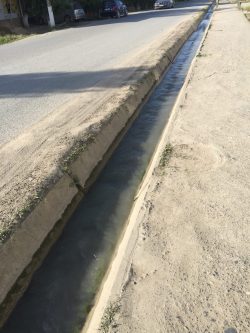 Every town has these with water running quickly through them.  I have seen dishes washed in these from a commercial premises, children playing, people washing. 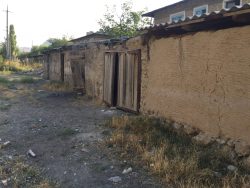 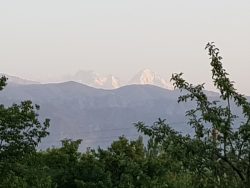 Some high mountains in the distance, the view from our hotel window.

The next day was just “one of those days”.  Firstly my rear tyre had gone flat again, we couldn’t see anything causing it, just a slow leak, so Charlie kept an eye on it all day and pumped it up again when needed.  Then we had an extra hour added to our border crossing to Tajikistan as all the officials went to lunch, so that was 3.5 hours.  Finally when we got to Kharjund we couldn’t find our hotel, it took two hours!!  We asked in all the shops, at the other hotels around, and were told – “It’s changed its name, it’s up that street” “go to the end of the road and turn right” back up that road and it’s on the left”, it just went on and on – the GPS and MapsMe both had the same place marked but the place wasn’t there, nor was the address right on Booking.Com – such a pain especially with me still not 100%.  Finally one of the hotel receptionists called for us (we had asked others to call for us previously) and they came and got us.  It was an apartment, not a hotel as advertised, there was no signage and was in a different street – we would never have found it.   However the people are just lovely, the apartment comfortable, and the bikes in secure parking in their own garage just around the corner, so it all worked out well.  Just required patience!!

Spent the next morning walking around town, visiting the bazaar of course to get some food for lunch.  So many people want to chat and find out where we are from, where we are going, they are so friendly. 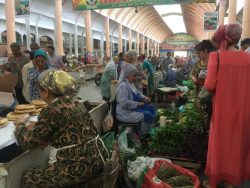 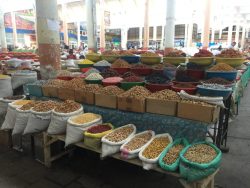 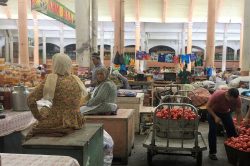 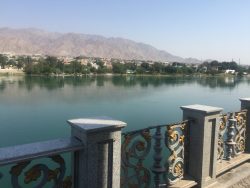 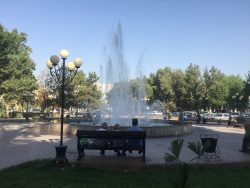 Of course there are beautiful parks with fountains – I love the community it brings – here a three older guys just sitting “chewing the fat” and watching the world go by. 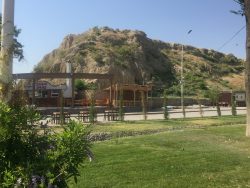 The remains of Alexander the Great’s northernmost Central Asian outpost, you can still see some of the original bricks that made up the walls.  This city is 2500 years old but the Mongols flattened it when they came through so not much remains of the old. 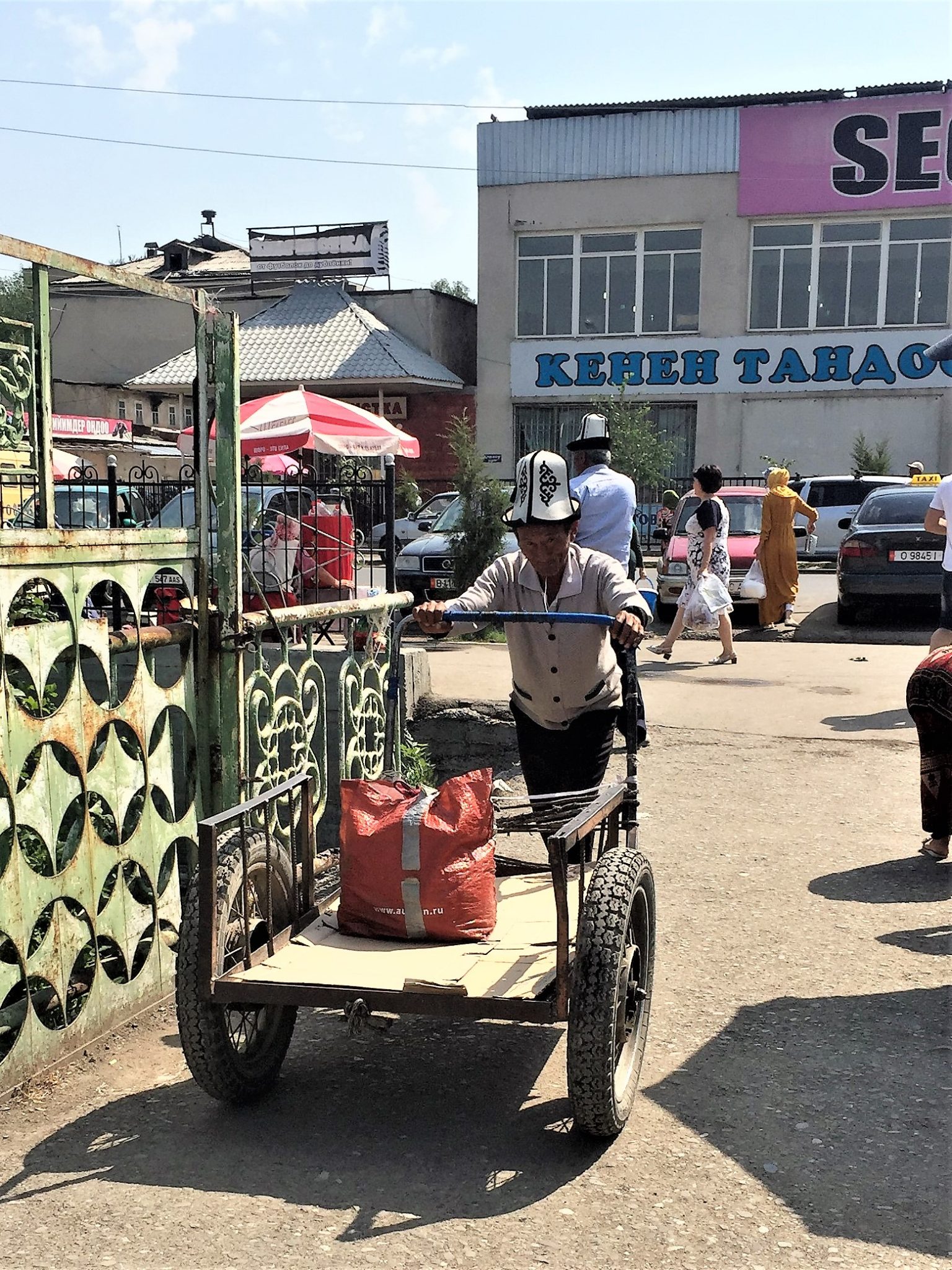