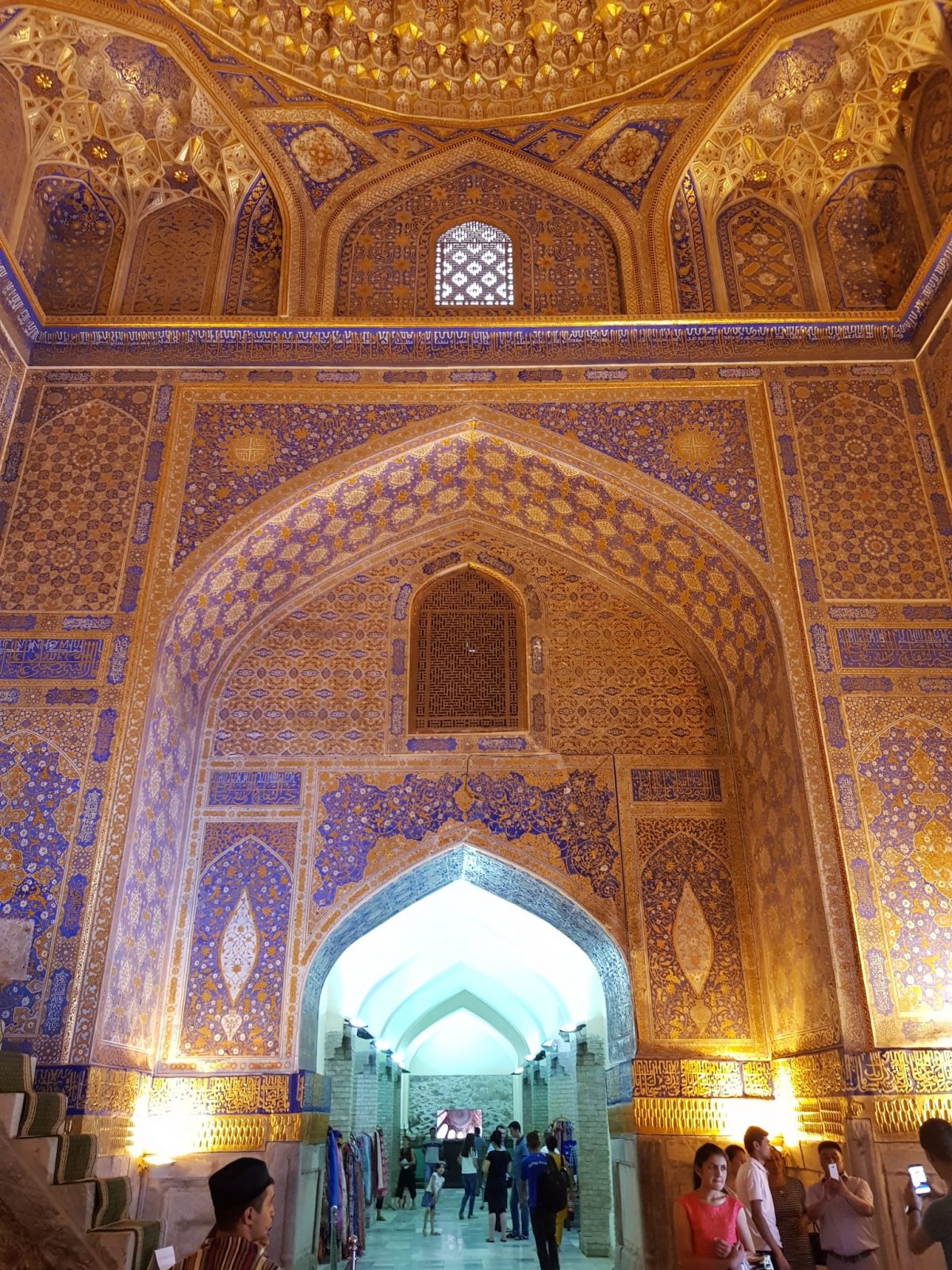 We are back in the land of good wifi  (I’m a happy girl) so i’ts catch-up time.

The road to Samarkand – we climbed up and over mountains 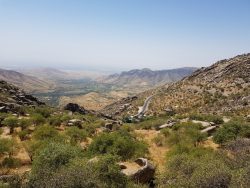 The view from the top

We arrived in the city on the University Exam Day, which means that all internet in the city is turned off so that there can be no cheating, and also the roads leading to our hotel were blocked by buses.  We had to u-turn twice and then eventually followed our noses up the back streets of the old town. 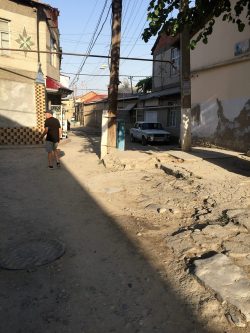 Went back the next day to take some pics – the streets were not only two way traffic but also filled with people doing their usual daily activities. 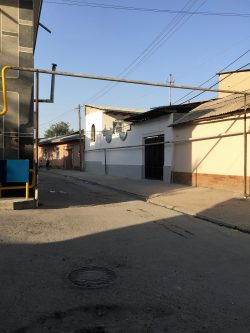 You see these pipes everywhere – they carry gas.

The next day our tour guide picked us up and we spent the day in an air-conditioned car as we travelled to the sights.  Nice!!

Samarkand was once the hubbub of the Old Silk Road which carried trade from China, Egypt, India and Europe, mostly on camels.  Silk from China to Europe, glass on the return journey, spices etc.

Alexander the Great brought his armies through here, then much later Genghis Kahn conquered this area in the 13thC, but because he was nomadic he didn’t appreciate the value of buildings so he destroyed everything and consequently much of the older history has been lost.  Still, there are buildings here from the 15thC.

Timur was a strategic  leader and during his time the Uzbeks conquered land from Turkey, Northern Iran, Iraq and Syria, as well as Northern India, campaigns into Russia, and all Central Asia in between.  When he died he was taking his campaigns into China – he wanted control of the Silk Road because that was where wealth was generated.

Very little is actually original in Samarkand but has been restored – however, it didn’t take away from it.  Here are some pics. 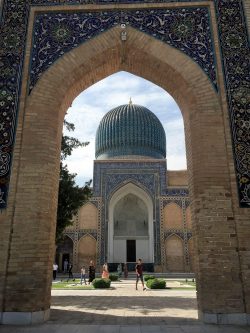 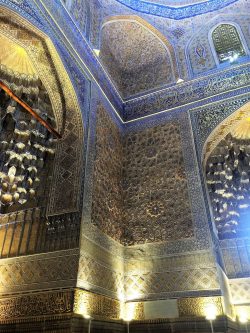 Timur’s Mausoleum, where he is buried – this is just down the road from our hotel – inside are tiles and gold leaf. 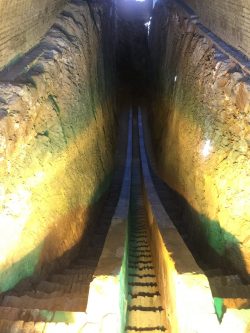 The Ulugbek Observatory – he was ahead of his time, and was recognised internationally for his astronomy.  His calculations were only seconds out from those since created by computer.  This is all that remains of his sextant which he designed then used to observe the sun and stars.  All that was above ground was destroyed. 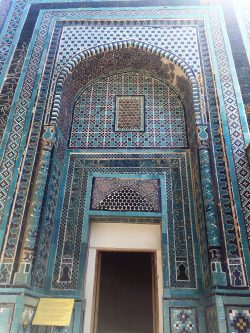 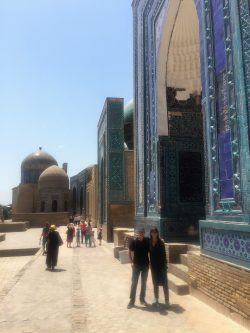 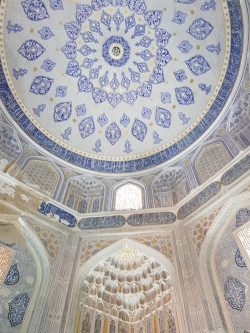 Shah-i-Zinda – the avenue of mausoleums – again the architecture, detail and artwork in the tiles was beautiful.

The Registan (below) – this is medieval Samarkand’s commercial centre with the world’s oldest medressas, anything older having been destroyed by Genghis Kahn.  Timur’s grandson (Ulugbek) was very much into education and he was responsible for the building of the Registan, which are 3 universities/medressas, for the education of boys for free, who then worked in the government.  The square in the centre would have been the old marketplace. 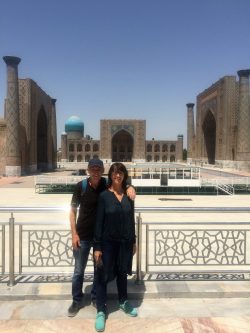 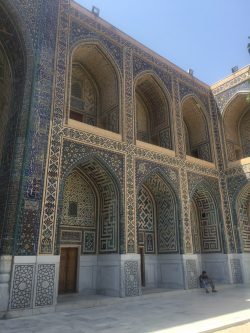 The classrooms and living quarters 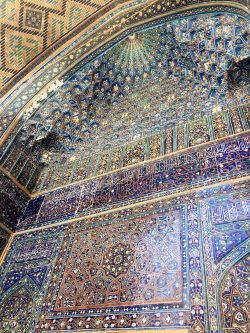 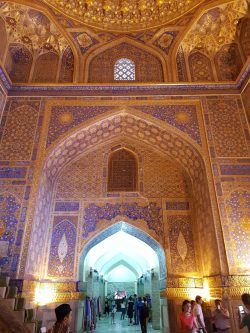 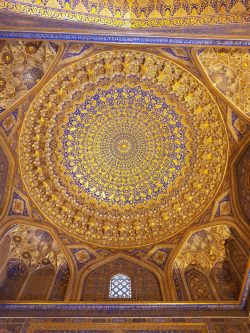 The dome is an optical illusion – it is actually flat but given a 3D dimension by the way it is painted.

We learnt so much, not only the history, but also about the design of the tiles, archictecture etc it was very interesting. 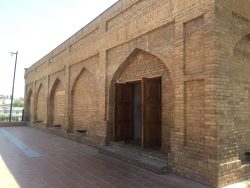 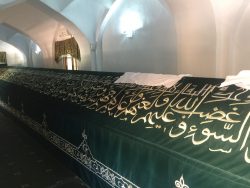 The following day, after catching up with some friends, we walked to the prophet, Daniel’s Tomb.  Apparently Timur brought Daniel’s remains from Susa in Iran, to Samarkand, for good luck.  Interestingly there still remains a tomb for Daniel in Susa.  Charlie checked it out on Wikipedia and apparently Daniel has more tombs than any other prophet – so who knows, all is not necessarily as it may seem. 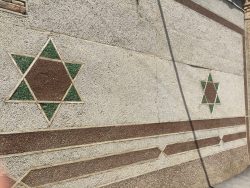 On our way back to the hotel we walked through the Jewish quarter.  There were 100’s of 1000’s of Jews living here once upon a time but most of them left Uzbekistan when it became free from the Soviet Union.  There are only about 300 now. 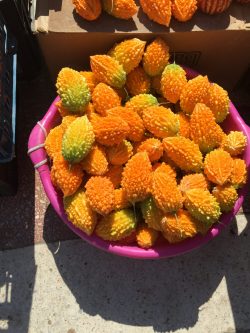 Some fruit I haven’t seen before 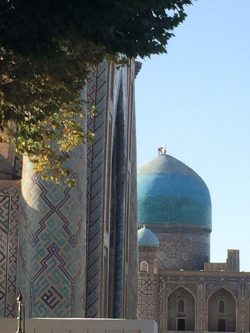 See the guy on the top of the dome – I wonder if he gets danger money?

Samarkand was a high point for us to visit being one of the main cities of the Old Silk Road – they have a saying here – “All roads lead to Samarkand”.  I think we were really expecting an older city but instead it is very vibrant and modern with restored places of interest.  Some people don’t like that it has been restored, but we enjoyed being able to appreciate the fullness of it. 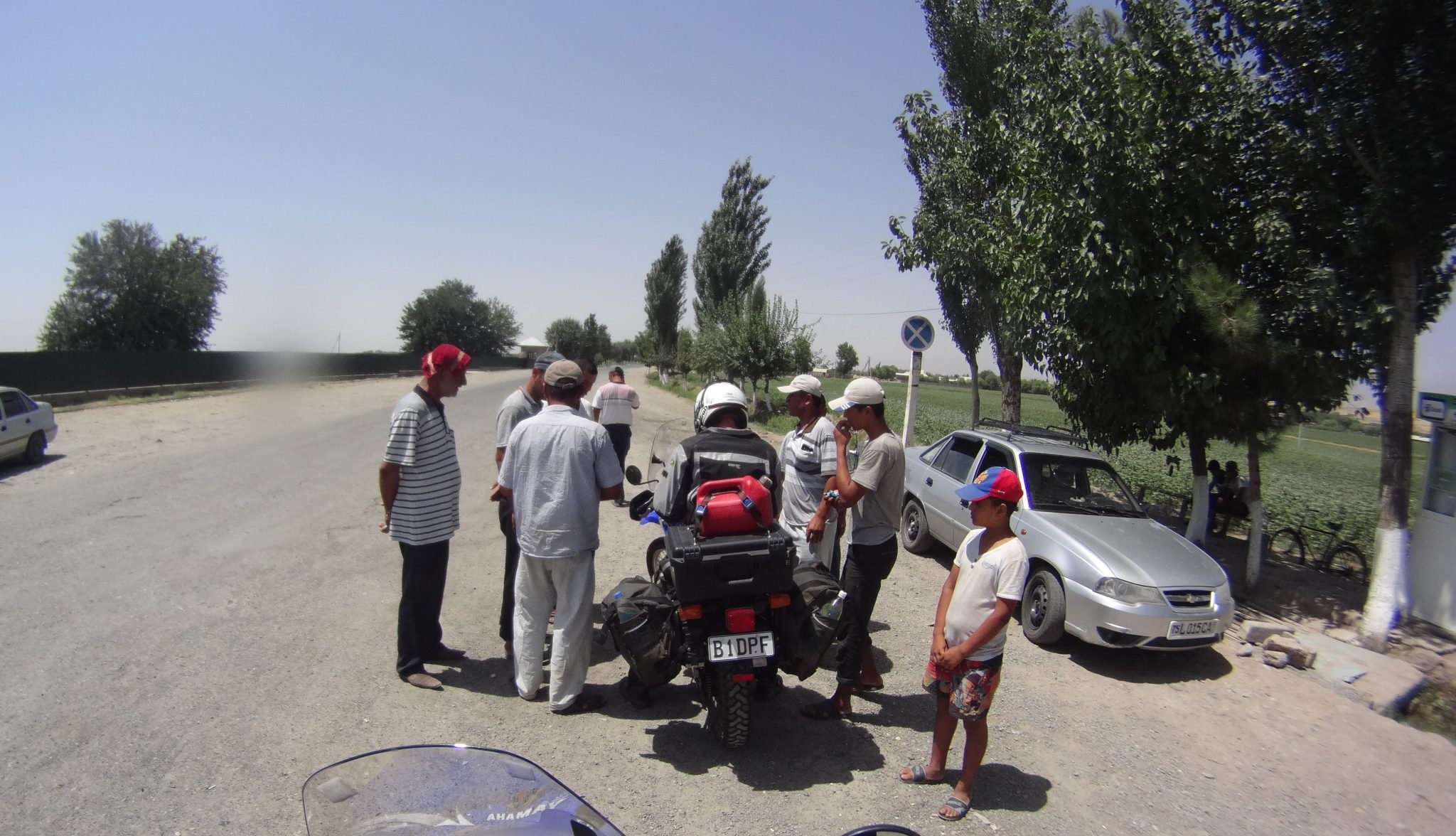 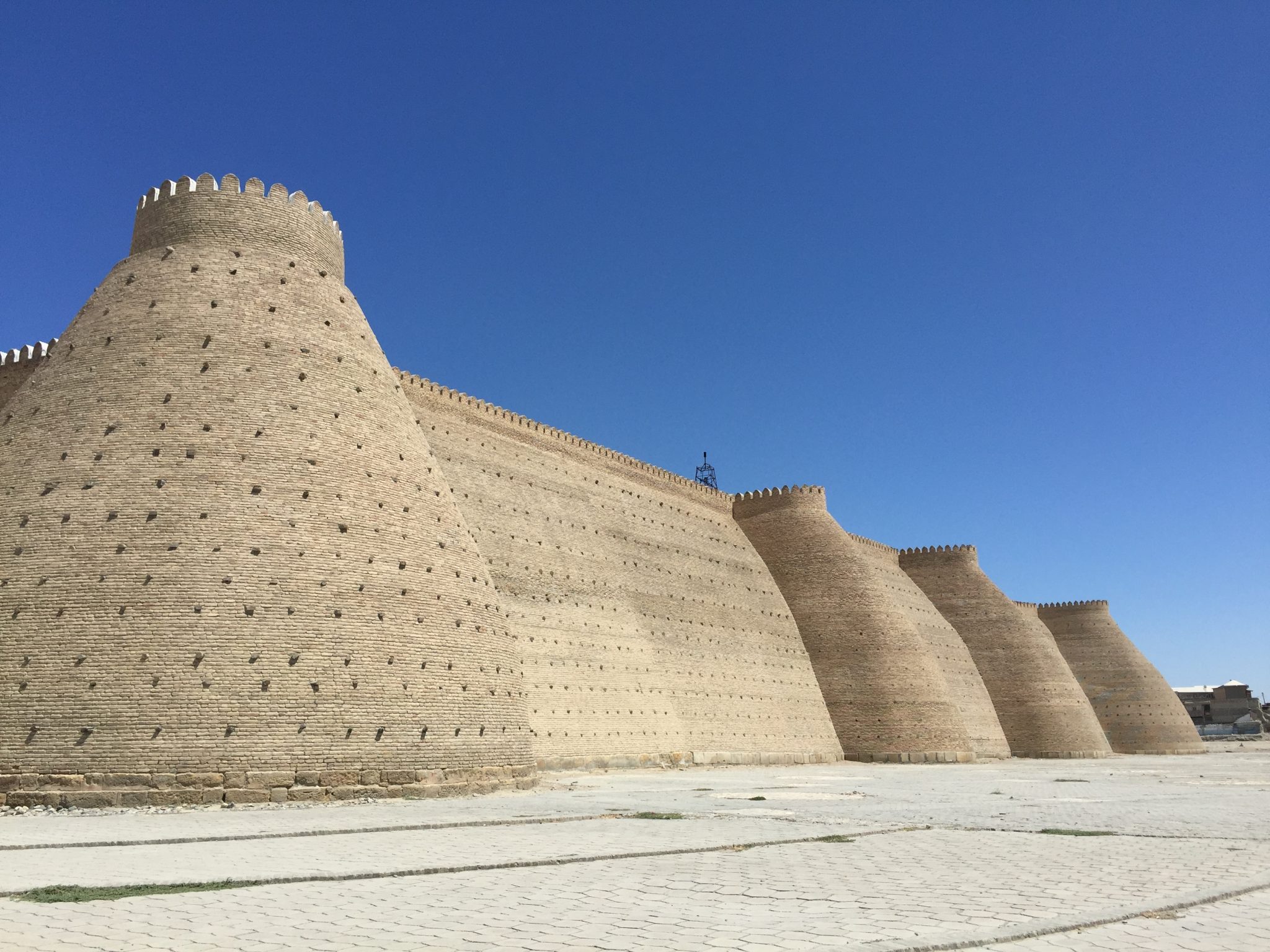