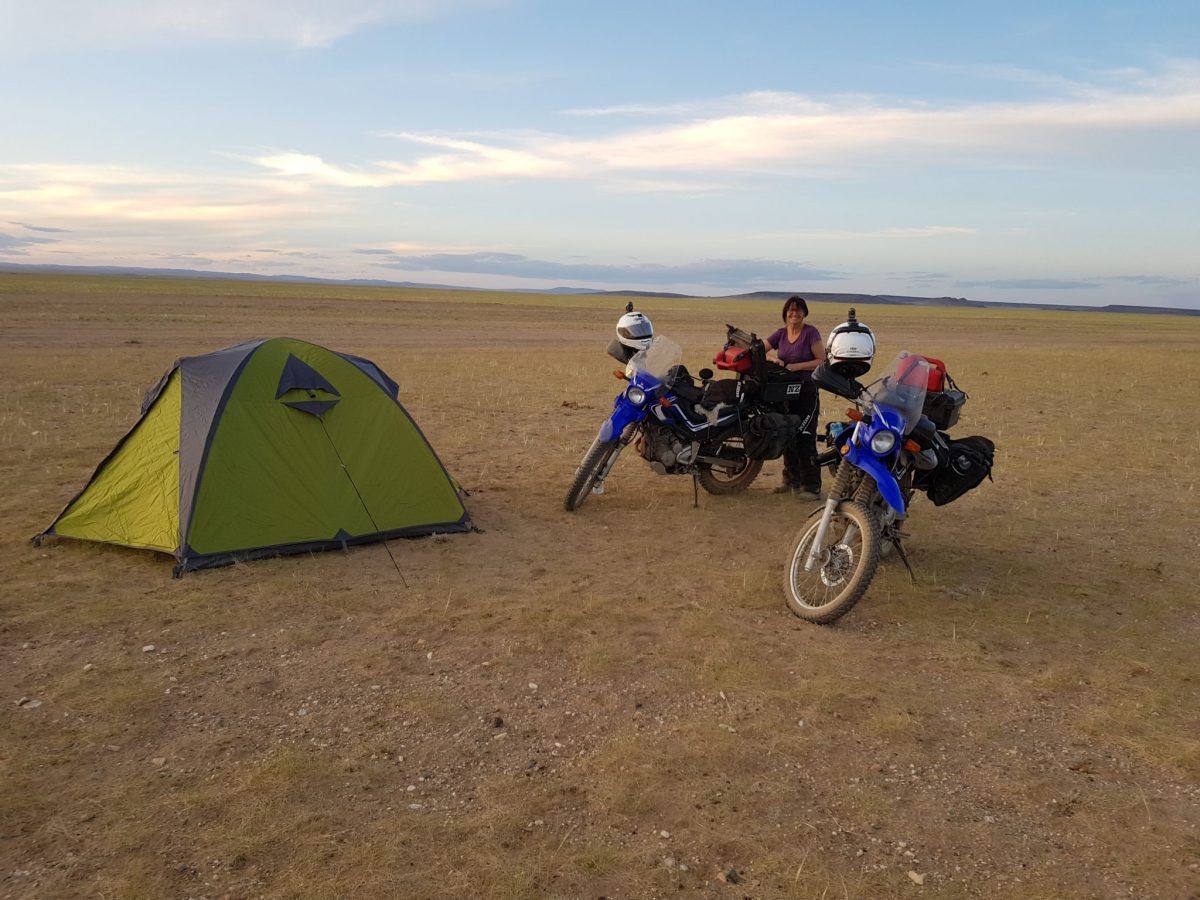 Anyone who knows Charlie, knows that for us to be camping there has to be a story behind it.  Well there certainly is.

I think the people who told us this stretch of the road was fine, have been living in Mongolia too long, or perhaps with riding a bike you see the surface differently.  The road does have some hard packed sand with washboard, but it also has rocks and soft deep sand. 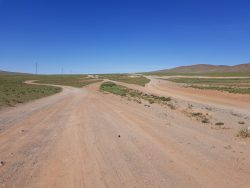 There are numerous tracks all going in the same direction, and you just pick what looks to be the best, the better tracks are usually the outside newer ones. 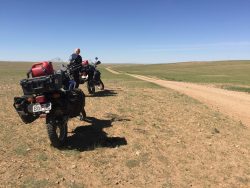 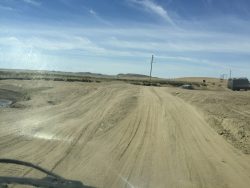 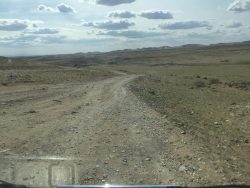 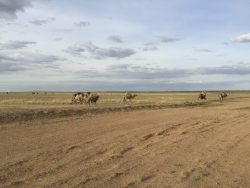 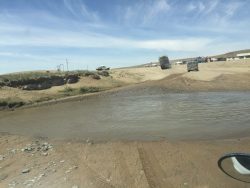 It was all going well, did one small water crossing which was fine the only tricky bit being dodging the dead animal on the exit.  This pic was taken later (see below), the animal had been removed.

However we found ourselves on a more minor track away from the others, how we got there we have no idea, but it was still heading in the direction we wanted so we kept going.  Because it isn’t used as much the track got more technical with lots of sand.  I only dropped the bike twice and I was pretty pleased about that, managed to keep upright through the other “wiggles”.

It was super hot and I was sweating heaps (way more than a glow).  After 90km I said to Charlie I needed a break and when I got off my bike I was really dizzy. Went straight into a crouch then came up more slowly but felt like I was going to pass out – I just couldn’t stand up.  I’m made of pretty tough stuff and rarely get sick so this was a very real thing for me.   I think maybe a mixture of the incredible heat, sweating more than taking in, no breakfast in the morning and the effort required to ride – I don’t really know, I just felt overcooked.  There was no way I could ride so I lay down on the dirt under the shade of my bike and we thought of options.  Charlie couldn’t go get help as he would have trouble finding me again, so we waited for a small truck to transport me and my bike out – nothing came, just a few cars, it was very remote as most of this area is.  So eventually we hit the SOS button on our DeLorme tracker, that’s what we have it for.  Jordan also gets the SOS message and was a huge help in keeping us informed because for some unknown reason we weren’t getting the texts from DeLorme. By nightfall, nothing, so we pitched out tent – see there was a story behind the tent. 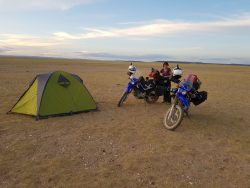 “Smile Janet”   No trees, hills, or rock to camp beside.  This is on the grass beside the road.

I got to see the amazing Mongolian night sky, which was beautiful, so full of stars.   At about 2:30am a team arrived using our co-ordinates, and we had to pack up our tent in the dark and go with them.  Charlie stayed with me in the vehicle and two of the guys had great pleasure in riding our bikes back to town, they are such capable riders here.

I said to Charlie I wanted to put my bike on a truck to Altai so he arranged that.  The guys fed us breakfast of yummy rice pudding porridge, took me to the hospital to be checked and after getting some medication, I had a sleep on their office couch with them working all around me. 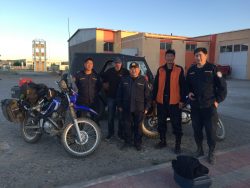 They were a very friendly and helpful team. 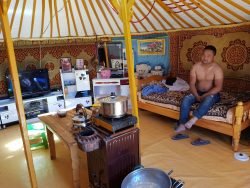 Got to see inside a typical Mongolian family ger where our driver lived.  Flat screen TV, fridge, water in a metal tanker by the front door, 2 beds which double as seats during the day, outside toilet, and the bathroom was a bucket and stool outside.

We loaded both bikes on a truck and off we went about 11:30am.

The road was rough with a lot of sand so we bounced our way all day averaging a speed of about 30-40km per hour. Our driver was very experienced but we still got stuck in the sand once, we also got a flat tyre.  It took us 10 hours to drive 380km of which nearly 130 was paved and straight, with a local driver who knew what he was doing.  It was so remote all through here, with very few gers, very little traffic, and you would need to look for your petrol. 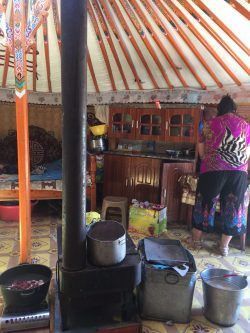 We stopped for lunch at a café – she took the order and started preparation from scratch making a very tasty lamb and noodle “stew” while we sat there drinking milk tea.

We got into Altai about 10:00pm and found a great hotel (the Entum, good food, hot showers, own garage for the bikes), and one of the guys on reception helped get the bikes off the truck.

Charlie had the first shower but the drain was blocked so I couldn’t have one, best excuse to just go straight to bed – I was sound asleep before Charlie even finished his shower. 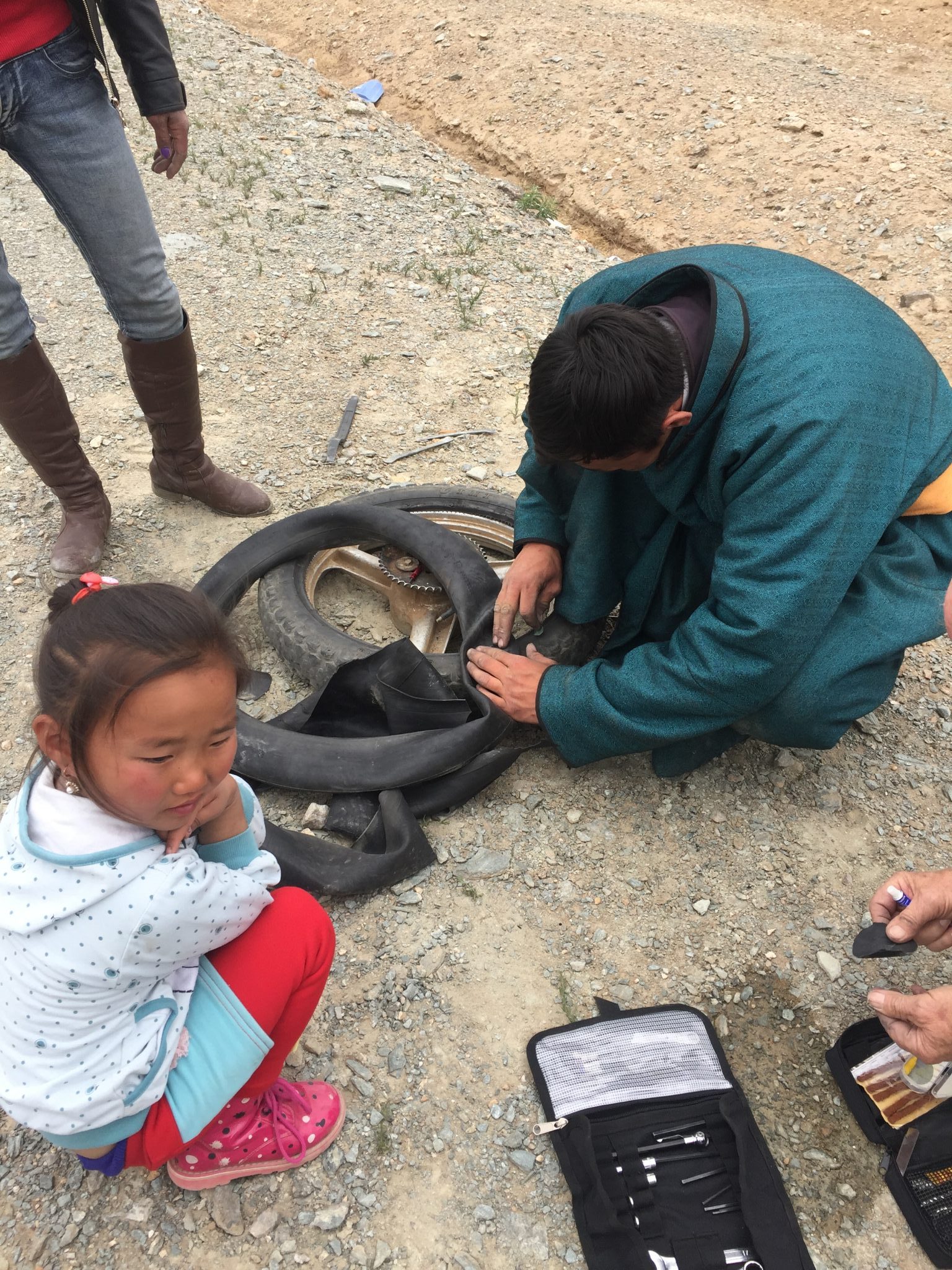 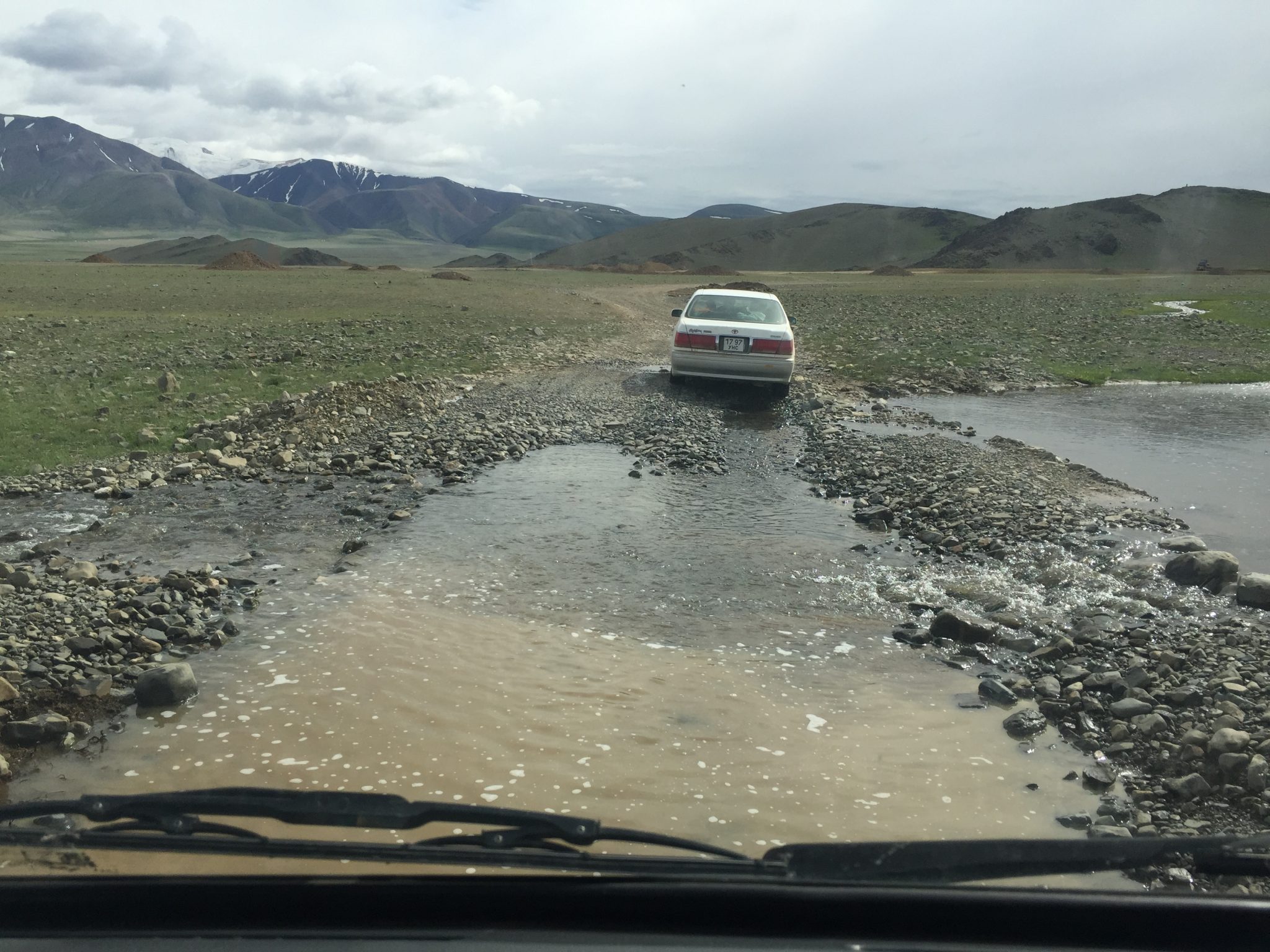